Today we have a vintage smooch from way back in 2001, from In Bed With the Boss's Daughter by Bronwyn Jameson, one of the books listed in the Summer of Romance research project featured in a recent Rachel Bailey post.  But first ...

... the winner of our last Sunday Smooch Giveaway, from before we took a smooch-free break over Christmas and New Year, is Donamae Kutsa.


Donamae, can you please contact Kandy (AT) KandyShepherd (DOT) com to receive your copy of Heart of the Bay.

And now for today's Sunday Smooch. 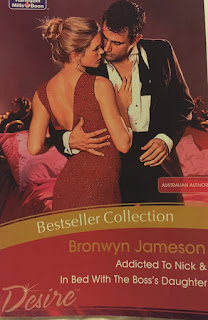 In Bed With the Boss’s Daughter


Six years later, the former innocent carried her pedigree like a shield—and was fighting her way into his world of billion-dollar deals. He’d sworn off loving this woman years ago...yet how badly he ached for her.

Scene set-up:
Jack has been manipulated into working with Paris, teaching her the ropes in her father’s property development empire. Jack is determined to keep her – and his desire for her – at arm’s length. This day he’s escaped to the corporate gym but Paris tracks him down, impatient that he’s been avoiding her and the obvious chemistry between them.


He snatched up a weight and started a set of bicep curls. Curl, release, three. Curl, release, four. “I thought you wanted to talk,” he bit out. Curl, release, five. When she didn’t answer, he made the mistake of glancing up and found her attention fixed on his arm, her focus hazy, her lips softly parted.

“Hell, Paris, I told you not to look at me like that.” He slammed the weight back into the rack, breathing harshly as he battled the tight, hard clutch of desire. “What is it you want to talk about? I have to be out of here in five minutes.”

“What’s that supposed to mean?” Eyes narrowed, hands on hips, he dared her to take issue. “Come on. Spit it out, princess.”

She almost did; Jack saw the instant she changed her mind. The almost imperceptible shake of her head, the compressed lips, as if she’d bitten down on the words. The movement of her throat as she swallowed them. She straightened. “Maybe this isn’t a good time.”

She took a step backward. Jack followed. It wasn’t rational, it wasn’t smart, but he couldn’t stop himself. He ached for an argument, a release from the hot roiling restlessness that had driven him to the gym. He’d hoped to pound it out of himself on the bag and maybe he would have succeeded. If she hadn’t shown up.

“Running away again?” he asked as she continued to backpedal. He was still one step from reaching her when she tripped. In slow motion he saw her flailing arms, heard her startled breath, felt the grab of her hands as she tumbled backward over the edge of the bench, dragging him down with her.

They hit the floor hard. The dull sound of the impact throbbed in his head as he attempted to fill his winded lungs. Somehow he’d managed to end on the floor side of their tangled bodies. And despite the ringing in his ears and the elbow planted in his abdomen, he was instantly aware of the leg nestled between his. The soft weight of her breasts against his chest.

“Are you all right?” she asked. And when she scrambled off him, both the heavy silk of her hair and her stockinged leg dragged against his skin. He was not all right.  Eyes closed, he groaned in response to the dual-edged torture.

“I’m sorry. You took all my weight and I’m no lightweight. Did I hurt you?”

He felt her moving, heard the soft rustle of her clothing as she sat up. And then, God help him, she was touching him. Her hands skimmed across his shoulders, up his neck, over his skull. Another hoarse sound, part pleasure and part pain, tore from deep in his chest.

“Where?” As her fingers probed further around the back of his head, she must have leaned forward. He felt the brush of her jacket against his arm, the whisper of her breath on his face. He inhaled her soft scent until his senses overflowed, and then he opened his eyes and looked directly into hers. The concern in their woodsmoke depths caused something to squeeze tight in his chest, then to unfurl slowly, as if releasing him.

“Everywhere,” he replied simply. Whatever she read in his answer or his eyes caused her lips to part on a barely audible “Oh.” Then, “Would you like me to kiss it better?”

Her throaty tone resonated through his body, marking every spot he wanted kissed.

“Here?” she whispered, feathering her lips against his chin. Then she opened her sweet mouth against his skin and branded him with the delicate slide of her tongue.

Oh man, had he really been avoiding this?

Her mouth lifted, and she traced a gentle fingertip across the bump on his nose. “How did you do this?”

“I walked into a steel girder.”

“Silly you.” She smiled.

“Silly me,” he echoed as he slid his hand under the fall of hair that curtained their faces. Gently but insistently he pulled her mouth down to his.

It was nothing like their first kiss, rough with anger and disappointment, yet her mouth seemed familiar, and absolutely perfect under his. He couldn’t describe the complexity of emotions tumbling through him as he tasted the smile on her lips, but he knew whatever he felt transcended physical need. And as he increased his pressure on her nape, he embraced it with all his being. 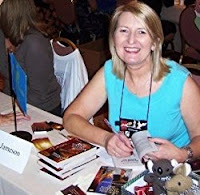 Hello, Bronwyn here, thinking about avoidance and how futile it can be (as Jack discovered in the above scene.)  I've been avoiding a really tricky (emotional) scene in my work-in-progress and writing all around it.  Futile, right, as I know it must be done.

Is there something you've been avoiding lately?   Come on, 'fess up.  I'll be selecting one winner from the comments who can choose a copy of my book (in a duo) or a $5 Amazon gift card.


Come back next Sunday, when the winner of today's giveaway -- a copy of Bronwyn Jameson's Bestseller Collection containing In Bed With the Boss's Daughter and Addicted to Nick -- will be announced and a smooch from Amy Andrews'  brand new Playing the Player will be posted!