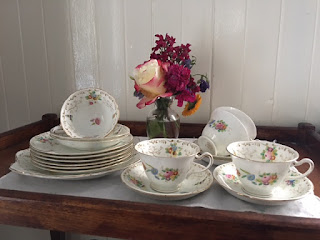 This is my first official blog as a newly appointed Love Cat so I wanted to share something about one of my great loves- tea.  I start each day with a cup of black tea and I have different cups for different times of the day. I know what you're thinking and you would be right.  I'm obsessive!

I grew up in the era ( or maybe it was just my particular household) where the only drinks we had were tea or coffee or water. Soft/soda drinks, cordials and alcohol were special occasion drinks such as Christmas and birthdays. So I began drinking tea quite early in my life and literally cannot start the day without my cuppa. And it has to be hot. Piping, burn-the-lips-on-the-first-sip hot!

I inherited my grandmother's tea set and it is one of my most treasured possessions. She brought it out with her from England in 1914 when she came to live with a doctor's family in Sydney as a governess. She was waiting for my grandfather to join her after he finished serving in the war. ( This sounds like the plot of a historical, doesn't it?) My grandmother died when I was six and I wasn't given the tea set until my fortieth birthday, but in all those years I never saw anyone use it. It was in the special items cupboard at my parents' house and considered too fancy to be used.


Guess what I did as soon as I got it in my hot little hands? Yes. I had a tea party! Yay. I adored using those cups for the first time. 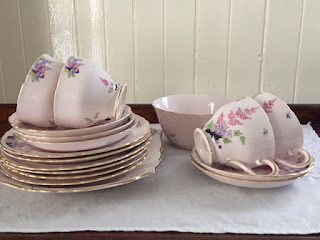 I have other tea sets I've found at flea markets ( see above photo) that I use much more often than my grandmother's one.  I would hate anything to happen to any one of those lovely cups and saucers and cake plates as it would feel like I was losing a part of my grandmother's legacy. But it doesn't  stop me using it on select occasions. I now have my own special items cabinet- a French one that I adore. 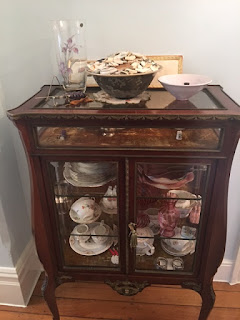 Do you have a special treasure at your house? Do you use it or just look at it?
I have a signed copy of my most recent release Unwrapping His Convenient Fiancee as well as a copy of my last release, His Mistress For A Week, which incidentally has a heroine with an obsession about a tea cup!