Today we have a smooch from Amy Andrews but first


... the winner of last week's Sunday Smooch Giveaway is Laurie!

Can you please contact mail (at) helenlacey (dot) com to receive your prize!


And now for today's Sunday Smooch from Tis the Season To Be Kissed. 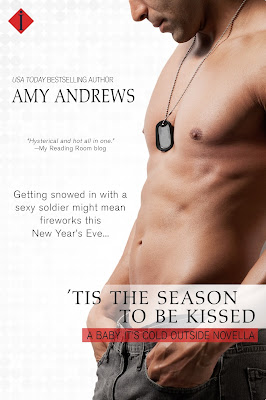 A bit of a retro smooch from a release that's 3 years old but as it's approaching Christmas I thought it was entirely appropriate! :-)

Tamara and Luke are snowed in at his family's Vermont cabin for New Years Eve. He's a soldier returning home from his latest stint in the middle-east, she's a romantically unlucky kindy teacher who thinks kissing is a gateway drug and is tipsy on egg nog at 9 in the morning because she doesn't know how to light the fire and her love life is a disatser but hey, at least the booze is keeping her warm.

They're drinking beer, eating Cheetos and playing Scrabble to pass the time and distract themselves form the raging sexual tension because Tamara is sworn off men and Luke is her friend's younger brother and five years might not be much of an age gap but she's at a different stage in her life than him and is only interested in guys ready to commit. Luke suggested strip Scrabble but Tamara is refusing to be drawn. Luke is playing dirty by coming up with every risque word in the dictionary!


Over the next fifteen minutes Tamara struggled to keep the game clean but it was difficult when her opponent seemed to find a suggestive word on his stand every round.
Come, breast, touch and moan were all on the board taunting her. When talk and dirty followed each other in quick succession she glanced at him sharply and the sudden smoulder in his gaze seemed to have leapt directly from the fire. Her throat was parched and she pulled at the material around her neck as the air around her grew thick and sludgy.
“Hot?” he asked and she wasn’t fooled by the innocent inquiry.
Tamara slapped an n next to an o on the board and glared at him as she said, “No.”
“Hey, two letters,” he tisked and she watched as he shook his head back and forth in slow motion. There was a smile in his eyes and he looked so damn sexy she wanted to grab his face and lay one right on his mouth. “That’s no way to build a board.”
Tamara didn’t care. She was hot. Very hot. So help her she wanted to strip all her clothes off and the glint in his eyes told her he knew it.
“I’m still open to strip Scrabble if you want to lose a couple of layers.”
She narrowed her eyes at him. “Your turn.”
Tamara was grateful when he returned his frank gaze to his letters. There was something disconcerting about being with a guy who didn’t appear to give a damn about the consequences. It was hard to keep up the mature responsible act in the face of such devil-may-care attitude.
He seemed to stare for an age at his tiles then he lifted those blue eyes and speared her with a look she was fast coming to recognise as trouble. Her pulse rate trebled as the seconds ticked by.
“Luke?” she prompted. The words felt tight and rough in her Cheeto-dry throat.
“My turn?” he murmured. “Okay.” Then in one swift move he whipped his t-shirt up and over his head.
Tamara stared at him flabbergasted. “Luke,” she squeaked.
The mature responsible thing to do would have been to tell him to get dressed immediately but firelight on acres of broad, tanned chest was too damn distracting and her eyes demanded she take full advantage.
Her fingers itched to join them.
“Your turn.”
Tamara dragged her gaze back to his face. “Wha...?” she asked trying to clear a heavy fog from her mind and a jettison of oestrogen flooding her belly and rushing to the apex of her thighs.
He smiled at her. “Your turn,” he repeated as if he were talking to someone who’d been a little short-changed in the brains department.
But her gaze had already obeyed the powerful dictates of hormones and was back to warm skin and toned muscles.
“Can’t go?” he prompted. “That’s means I get another move right, if you forfeit?”
Tamara wasn’t capable of responding. In fact she barely heard him as his throat bobbed and beckoned with each word from his mouth, his carotid pulse sure and steady.
Finally she got the vampire thing!
She nodded her head absently because he seemed to be waiting for some response from her but when his gaze fanned across her mouth like the stroke of a feather, everything came back into sharp focus.
“Luke,” she murmured huskily as the carnal intent in his eyes turned them to blue flame.
It was meant as a warning but it came out sounding all breathy and needy. Like a plea. Luke certainly seemed to take it that way because he didn’t back off. Suddenly he was looming closer, breeching the board-width distance between them, his eyes locked on her mouth. Then his hand was sliding up her neck, gliding into her hair, his thumb tilting the angle of her jaw and his sheer masculine focus was utterly paralysing as his lips slowly descended onto hers.
The kiss was light. Tentative. Giving her plenty of room to back away. Which, in those few, lonely, endangered cells that existed in the more evolved area of her brain, she truly appreciated.
Because the rest of her was just pure animal.
She moaned and leaned into the kiss as her deprived system went into complete meltdown and Luke gave it the shot of testosterone she’d been craving. He tasted like beer and Cheetos – a truly intoxicating combination – but those damn insistent cells were yammering at the back of her brain and she dragged herself away before it escalated and they were naked on the rug going at it.
She was breathing hard, her neck and face flushed as he watched her through those flammable eyes and she savoured the taste of him.
“No?” he queried, his voice soft and faintly burred and it was gratifying when he cleared it, to know he was as affected as she’d been by the kiss.
“Gateway drug,” she murmured desperately clinging to sensibilities that had been well and truly scrambled. She had to remember where she was and who she was with and not let a little horniness overrule common sense.

Luke was having a hard time pulling himself back from the edge after just a tiny sip at her mouth. He wanted more.
He wanted it now.
And if she thought he was just going to give up on what he already knew could be a pretty great night then she was about to get a lesson in Jackson determination.
“Tamara...let’s not fight this. You’re here, I’m here, its New Year’s Eve, we have a snowed in cabin and a roaring fire. And I know,” he said quickly as she opened that delectable mouth which should still be kissing his but wasn’t because she thought too much, “that we’re different and we want different things out of our life right now. That you’re older than me and you’re my sister’s friend and you want a baby and a husband and the whole white picket fence thing and I’m not looking for any of that.”
He picked up her hand that was lying loosely in her lap and he brought it up to his heart so she could feel its heavy beat.
“I get that, I do,” he continued. “But right now... tonight...isn’t about any of that. It’s just a moment in time when two lonely people get to be there for each other, get to forget about all the crappy stuff that exists outside this cabin, stuff we don’t have a lot of control over and do something about what we do have control over.”
She furrowed her brow, her gaze falling to where his hand covered hers. He could see she was tempted, could feel her reluctance to break the connection that was coursing through her palm into his heart. But she wasn’t quite there yet.
“And how do we act in a few days’ time at Georgia’s birthday party?” she asked huskily.
He shrugged. “I’ll play it whatever way you want,” he smiled. “You want to tell Georgia we met here, that’s fine. You want to tell her we slept together I’m fine with that too. You want to keep it between us I’ll say, pleased to meet you ma’am and you’ll say likewise and only you and I will know we’ve seen each other naked. Because Tamara, I really, really want to see you naked.”
Luke watched her swallow. The pads of her fingers pressed into his chest a little as if she was fighting the urge to grab a handful of pec and haul him closer. And he felt the moment she let go too, the tension draining from her body, her hand becoming slack against his chest.
“Goddamn it,” she muttered, sweeping the board aside with her other hand and launching herself at him. 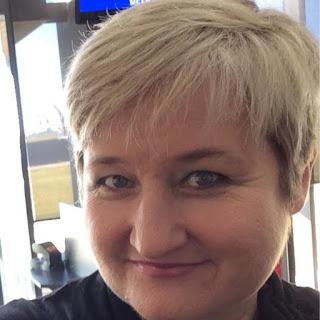 For your chance to win a digital copy of Tis The Season to be Kissed (must have an AMAZON account) tell me, what would be your fantasy Xmas location if money wasn't an issue?