... the winner of last week's Sunday Smooch Giveaway is  RIET!

Congratulations! Can you please contact Kandy Shepherd via kandy (at) kandyshepherd (dot) com to receive your copy of GREEK TYCOON'S MISTLETOE PROPOSAL! 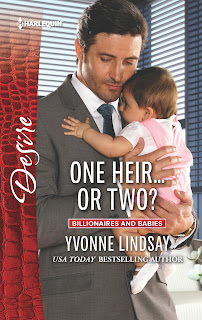 Will the billionaire dad wed the surrogate mom? Find out with USA TODAY bestselling author Yvonne Lindsay!
Kayla Porter vowed to be a surrogate for her deceased sister's embryos. She's already given birth to her niece Sienna. But a clinic crisis means she's running out of time to fulfill her promise. She needs Donovan Murphy's help--if they can work around the xplosive chemistry that's reignited between them!
The tech tycoon agreed to be a sperm donor, not a father. But that changes when he meets baby daughter Sienna. He will claim his little girl...and her passionate, headstrong mother!

Self-made tycoon Donovan Murphy grew up the hard way, now he knows exactly what he wants...and exactly what he doesn't. Children and messy emotional attachments are definitely off the cards. So what's the man to do when the sister of his late best friend comes back on the scene? The sister he slept with once, and who now is determined to bear his children. Taking care of Kayla and the child she's already borne, a child he is the donor father of, throws all sorts of temptation in his way. After butting heads with Kayla for the umpteenth time, Van takes action.

“You still keep a wall between you and the rest of the world, don’t you? I’ve only seen you take that wall down once.”

“What are you talking about?”

“Our night together,” she said passionately. “I know you felt that night. Be honest. You were hurting. I know I was. And, just for a while, we both made the hurt go away. We felt something together. Something that was bigger than the hurt, something that was special. Don’t you ever think about it? Don’t you want to feel like that again?”

“No, I absolutely do not. That night was nothing but a mistake.”

He launched toward the edge of the pool and hauled himself out, distancing himself from the conversation both mentally and physically. The way he always did from anything that approached emotion, she reminded herself. She shouldn’t feel as though she’d lost something precious, but she did. By the time Kayla got out of the pool and wrapped herself in the toweling robe she’d brought down with her, he was gone.

She’d never learn, she thought as she made her way up to her room. Always blurting stuff out. Well, at least it made life interesting, she consoled herself, as opposed to the frozen wasteland that was Van’s chosen emotional spectrum. She closed her bedroom door behind her and leaned back against it, feeling loss and sorrow seep through her. A knock on the wooden surface behind her made her start. She turned to open the door.

Van stood there, a towel wrapped at his waist and a smoldering green fire burning in his eyes.

His hands grasped her shoulders and he tugged her toward him. Stunned, she offered no resistance. His lips were hot and dry as they descended on hers. A bolt of desire, searing and desperate, shuddered through her as their lips met, as his tongue swept across the seam of her mouth. She parted her lips on a cry of need and he wasted no time deepening the kiss.

Kayla’s hands flew to his head, her fingers driving through his short dark hair, her nails gently scraping his scalp. He groaned into her mouth and the sound felt as though it vibrated throughout her entire body. She could already feel the press of his hips against her. Feel the hardness that spoke of his need for her. Inside, she turned molten.

A maelstrom of sensation poured through her as he wrenched free the knot in her robe’s belt and pushed aside the lapel to expose her to his starving gaze. His hand shook as he reached for the neck tie of her bikini. One quick tug and the too-small triangles of damp fabric fell to her waist. With one finger he traced a faint blue vein on her swollen breast, then followed it with the tip of his tongue.

She tried to speak, to tell him how he made her feel, but the second his mouth closed around her nipple, words failed her. Her knees threatened to buckle and send them both crashing to the floor. As if he sensed her weakness, he scooped her into his arms and carried her next to the bed and put her gently down on her feet again. Three more flicks of his fingers and her bikini top was off and her bottoms had fallen in a heap on the carpet. Her robe followed. Then his towel.

Kayla traced her hands over his chest, down his rib cage and lower to the waistband of his swimming shorts. Her fingers closed over the bulge at the front and he dropped his head to the crook of her neck. One of his hands closed over hers, halting her when she would have squeezed him.

His voice shook. “I want you, Kayla, but if you don’t want this, too, say it now while I can still, maybe, leave this room.” 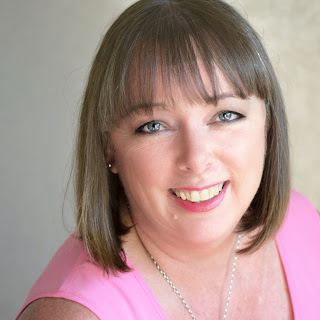 I'm very proud to say that ONE HEIR...OR TWO? is my 35th title with Harlequin Desire. I hope you enjoyed the smooch and I hope you'll look out for the book when it hits the stores on November, 8!

It always seems to me that the number 3 features very strongly in important days and events in my life. Do you have a special number that means something to you? Share your thoughts and be in to win a signed paperback edition of ONE HEIR...OR TWO? (open to international readers).

Come back next Sunday, when the winner of today's giveaway will be announced and a smooch from HELEN LACEY will be posted!