... the winner of last week's Sunday Smooch Giveaway is Helen!

Can you please contact
bronwynjames@gmail.com
to receive your e-copy of your choice of Anne McAllister's Tanner Brothers


And now for today's Sunday Smooch from Kandy Shepherd 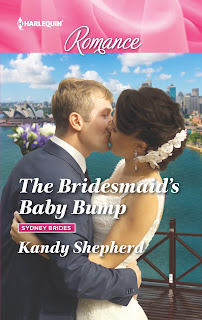 The billionaire bachelor's baby!
When party planner Eliza Dunne meets billionaire Jake Marlowe at a wedding, she decides to finally give in to the sparks that have always fizzed between them!
The connection is so intense that Jake can't resist Eliza—but with the divorce only just final after his unhappy marriage, he's not ready for anything serious. But when Eliza tells him her shocking news—she's pregnant with his baby!—he has one certainty: he wants to be at the center of his new family, as a husband and father…

The Bridesmaid’s Baby Bump is the third and final book in the linked mini series ‘Sydney Brides’ from Harlequin Romance.

Eliza Dunne and billionaire Jake Marlowe have twice been bridesmaid and best man at the weddings of Eliza’s two business partners at Party Queens, their party planning business, and Jake’s two best friends. (Gift-Wrapped in Her Wedding Dress and Crown Prince’s Chosen Bride.)

The attraction between them was instant—but Jake was still trapped in an unhappy marriage. Both honourable people, they did nothing about the attraction. Now Jake is divorced—and finally ready to pursue Eliza, who has her doubts about the domineering way he has gone about it.

He has hi-jacked her short vacation in Port Douglas in tropical Queensland and is driving her from the airport to her resort in his car. Before the smooch—their first kiss—she has suggested they’ve been over-thinking things. Why don’t they just relax and enjoy each other’s company? Jake has swerved the car onto a layby under some palm trees overlooking the beautiful Pacific Ocean.


‘Shall we agree not to worry about tomorrow when we haven’t even had a today yet?’

Eliza had been going to add not even a morning. But that conjured up an image of waking up next to Jake, in a twist of tangled sheets. Better not think about mornings. Or nights.
Jake’s grin widened. ‘You’ve got four days of vacation. I’ve got nothing to do except decide whether or not to offload my house in Port Douglas.’
‘No expectations. No promises. No apologies.’
‘Agreed,’ he said. He held out his hand to shake and seal the deal.
She edged closer to him. ‘Forget the handshake. Why don’t we start with a kiss?’

Jake knew there was a dating after divorce guideline regarding the first physical encounter, but he’d be damned if he could think about that right now. Any thoughts other than of Eliza had been blown away in a blaze of anticipation and excitement at the invitation in her eyes—a heady mix of sensuality, impatience and mischief.
She slid a little closer to him from her side of the car. Reached down and unbuckled his seat belt with a low, sweet laugh that sent his awareness levels soaring. When her fingers inadvertently trailed over his thigh he shuddered and pulled her kissing distance close.
He focused with intense anticipation on her sweet mouth. Her lips were beautifully defined, yet lush and soft and welcoming. She tilted her face to him, making her impatience obvious. Jake needed no urging. He pressed his mouth against hers in a tender kiss, claiming her at last. She tasted of salt—peanuts on the plane, perhaps?—and something sweet. Chocolate? Sweet and sharp at the same time. Like Eliza herself—an intriguing combination.
She was beautiful, but his attraction had never been just to her looks. He liked her independence, her intelligence, her laughter.
The kiss felt both familiar and very different. Within seconds it was as if her kiss was all he’d ever known. Her lips parted under his as she gave a soft sigh of contentment.
‘At last,’ she murmured against his mouth.
Kissing Eliza for the first time in the front seat of a four-by-four was hardly ideal. Jake had forgotten how awkward it was to make out in a car. But having Eliza in his arms was way too exciting to be worrying about the discomfort of bumping into the steering wheel or handbrake. She held his face between her hands as she returned his kiss, her tongue sliding between his lips to meet his, teasing and exploring. He was oblivious to the car, their surroundings, the fact that they were parked in a public layby. He just wanted to keep kissing Eliza.
Was it seconds or minutes before Eliza broke away from him? That kind of excitement wasn’t easily measured. Her cheeks were flushed, her eyes shades brighter, her lips swollen and pouting. She was panting, so it took her some effort to control her voice. ‘Kissing you was all I could think about that night in the castle.’
‘Me too,’ he said.
Six months of pent-up longing for this woman erupted into passion, fierce and hungry. As their kiss escalated in urgency Jake pulled her onto his lap, one hand around her waist, the other resting against the side of the car to support her. He bunched her hair in his hand and tugged to tilt her face upward, so he could deepen the kiss, hungry for her, aching for more. The little murmurs of pleasure she made deep in her throat drove him crazy with want.
His hands slid down her bare arms, brushed the side curves of her breasts, the silkiness of her top. She gasped, placed both hands on his chest and pushed away. She started to laugh—that delightful, chiming laughter he found so enchanting.
‘We’re steaming up the windows here like a coupled of hormone-crazed adolescents,’ she said, her voice broken with laughter.
‘What’s wrong with being hormone-crazed adults,’ he said, his own voice hoarse and unsteady.
‘Making out in a car is seriously sexy. I don’t want to stop,’ she said, moaning when he nuzzled against the delicious softness of her throat, kissing and tasting.
The confined area of the car was filled with her scent, heady and intoxicating. ‘Me neither,’ he said. 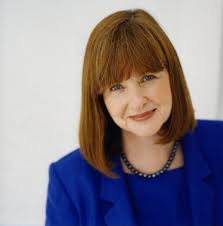 Making out in cars seems deliciously forbidden doesn't it? I loved giving Eliza and Jake their first kiss in a car.
I remember the time as a teenager I'd gone on a date with a intriguingly older, sophisticated guy. We were parked in his sports car outside our house smooching in the front seat when my mother decided it was time to water the garden. There she suddenly was hosing the grass on the pavement near where we were parked. How embarrassing! Needless to say Older Guy decided maybe a schoolgirl wasn't for him - I didn't see him again!
Have you had a memorable/disastrous/embarrassing kiss in a car? Or heard about one? Make a comment to be put in the draw for a signed paperback copy of The Bridesmaid's Baby Bump.

Come back next Sunday, when the winner of today's giveaway will be announced and a smooch from Annie West's The Flaw in Raffaele's Revenge will be posted!