Today we have a smooch from Helen Lacey ___ but first


Can you please contact Sue Mackay on lsmackay (at)  ts (dot) com (dot) nz to receive your copy of A December To Remember.........


And now for today's Sunday Smooch from Three Reasons To Wed by Helen Lacey........


"Why Daddy Should Marry" 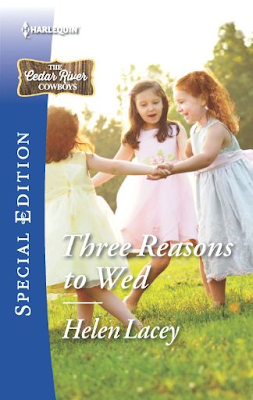 by Breanna, Milly and Tina

2. He looks cute when he plays dress-up with us.

In Cedar River, Grady Parker's a "catch." But on his ranch, he's just "Daddy." His three little daughters are all the females he needs…until Marissa Ellis moves in next door. He and his late wife's best friend never agree on anything—but attraction!

Marissa fulfills her promise to love her goddaughters, but their sexy cowboy daddy is off-limits. She can't—won't—step into her best friend's shoes and husband's bed, no matter how tempting he is, or how cozy his family. But three darling little girls can be awfully persuasive…

(Marissa and Grady are at a rodeo, celebrating the town's new naming day. Avoiding each other hasn't worked, with his daughters longing to Marissa's attention, and his meddling mother playing match-maker....)

When he reached her she took off again, past the bleachers and holding yards and toward the long row of stables. He followed her once more, feeling tension and irritation seep into his blood with every stride.


By the time she stopped she’d walked fifty yards. She pulled up outside an empty stable. Grady reached her and came to a halt. She turned, arms still crossed, eyes still bright.


She took a breath and spoke. “Liz never mentioned it.”


“About prom,” she admitted. “That you wanted to take me.”


An uneasy feeling seeped into his gut. The memories were vague, but still there. “She told me you weren’t interested.”


“She lied,” Marissa admitted, as if it was the hardest thing she’d ever said.


Grady frowned. “Why would Liz do that?”


“Because she loved you.”


It sounded so simple. So innocent. And he had to believe that it was. He’d loved Liz with all his heart. Nothing would change that. But he had to know more. He had to know everything. “And were you?” he asked quietly, moving a little closer. “Interested?”


She stepped back until she was pressed against the stall door. “Sometimes…sometimes for a smart man…you can be a real idiot.”


“What does it matter?” she whispered.


“I don’t know why it matters,” he replied, moving closer. “It just does.”


“No,” she said quickly, shaking her head. And then softer, raspier, “Yes.”


The churning in his stomach increased tenfold. He didn’t want to think about what it meant, but his mind wandered…if he had taken Marissa to prom maybe his life would have played out differently…no Liz, no babies he loved more than life itself. It was impossible to comprehend. Liz did him a favor. Liz always knew what he needed. Liz had been his rock after his father died and when he’d taken over the ranch.


But Liz was gone…


Grady stepped toward her and she raised a hand. At first he thought she was pushing him away, but she wasn’t. She reached out and rested her palm against his chest, directly over the spot where he knew his heart was beating wildly. And she sighed. A low, heady and wistful sound that reached him deep down, in that place he’d closed off, shut out, ignored for way too long.


And in that moment he couldn’t have walked away for anything in the world.


He moved closer, feeling the warmth coming off her skin as he covered her hand with his and held it against his chest. She stared up at him, all shimmering eyes and soft, pink lips. Grady looked at her mouth and saw her bottom lip tremble. He reached for her nape with his other hand and held her steady, stroking the smooth skin at the back of her neck.


And then he kissed her. Softly at first. Almost tentatively. Caution kept him under control. He wanted her permission. He wanted her to tell him it was okay. He wanted her to agree to what was happening between them. And then she did. Her lips parted and she let him inside her sweet, seductive mouth. His tongue found hers and the sensation spiked his libido with such intense force he groaned low in his throat. She felt so good. Tasted so good. And Grady quickly realized something—it didn’t feel strange. It didn’t feel awkward. Kissing Marissa felt like the most natural and deliciously sensual thing in the world.


He continued to kiss her and kept their mouths connected in the most intimate way, taking and giving, enjoying the soft slide of her tongue against his own, holding her nape gently. The blood in his veins surged, and need overcame everything else. Her hands looped around his neck and he felt her compliance, groaned when her tongue sought his as she pressed closer. He could feel her breasts, her hips, her thighs against him, could feel the heat of her body connecting with his in a way that affected him on some primal level. He wanted her. If he dared to move he would have walked the three steps into the stall, closed the door and made love to her on the thick bed of hay. But he knew he couldn’t. He knew it was going to be only a kiss. And for the moment there was no rush. No reason to stop. Nothing but the two of them, together and wholly connected. When sanity prevailed, he’d release her and pull away. But in those few, intoxicating seconds, Grady was unable to do anything else except keep the connection.


Until he heard Rex’s voice behind them. 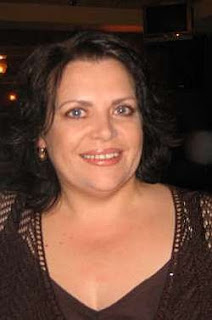 I'm delighted to share a smooch from the first book in my new series for Harlequin Special Edition, The Cedar River Cowboys....

Do you like a cowboy? Or is a city-boy more the flavour?

Leave a message and I'll draw a winner to receive  a signed copy of Three Reasons To Wed.....
Come back next Sunday, when the winner of today's giveaway will be announced and another smooch from will be posted!