Today we have a smooch from Kandy Shepherd but first

And now for today's Sunday Smooch from Kandy Shepherd's From Paradise... to Pregnant! 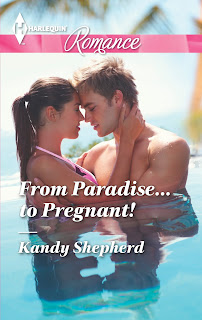 One night with consequences…

A week in Bali was accountant Zoe Summers’s dream vacation. But when the tropical island paradise is hit by an earthquake, she’s trapped—alongside Mitch Bailey, sports star and blast from her past! High on the thrill of survival, they seek comfort in each other’s arms…

It was only supposed to be one night, but Zoe soon discovers an unexpected souvenir—she’s pregnant! Now Zoe and Mitch will have to ask themselves…can one night lead to parenthood and a lifetime of love?

Zoe Summers and Mitch Bailey knew each other at high school where he was the popular jock and she the nerdy new girl. She helped him with an important project but their friendship ended badly. Eight years later they meet at a resort in Bali, unexpectedly brought together by an earth tremor that hit the island. Now he’s an international soccer star and she a successful businesswoman. They’re in the swimming pool of her private villa. The attraction is there for both of them but it was a strictly hands-off friendship in the past. They’ve never touched, certainly never kissed…

‘Putting it like that makes us both single,’ he said, his deep voice a tone deeper.

‘Yes,’ she murmured through a suddenly choked throat.

For a long, still moment their eyes held. The intensity of his gaze reminded her of Mitch as a student, determined to understand the subject she was helping him to master. Back then he’d been reading a page in a poetry book; right now it felt as if he was reading her face as his gaze searched her eyes, her mouth.

In turn she explored his face. His chiselled face. His strong jaw. The knowing glint in his green eyes framed by those too-expressive eyebrows. And his mouth, lifted to a half-smile that gave a promise of pleasure that made her own lips part in anticipation, her breath quicken.

Her eyes locked with his and a thrill of anticipation tingled through her.

Mitch Bailey was about to kiss her. And she was going to kiss him right back.

Mitch had been aching to kiss Zoe ever since she’d joined him in the pool. But just as his lips grazed hers, just as her lips parted under his, just as she uttered a delicious little moan of surprise and need, an Oriental-sounding chime came from the carved gate to the villa.

Mitch stilled. Zoe looked up into his eyes. He saw echoed in hers the same frustration he was feeling at being thwarted in their first kiss.

For a long moment they stood motionless in the water, his mouth still claiming hers, her hands resting on his shoulders in silent agreement to pretend they weren’t there.

Mitch muttered a curse under his breath. Then he pulled Zoe closer and kissed her hard. She wound her arms around his neck and kissed him back with equal passion. Heat ignited between them so fast he was surprised steam wasn’t rising from the water.

With regret he let her go, then pulled her back for a final swift kiss. If she could see his thought bubble now it would give her the promise torn from him. Later. 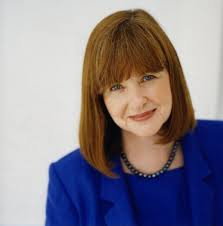 Kandy is giving away a signed mass market paperback copy of From Paradise...to Pregnant! to a commentator anywhere in the world.

All you need to do is tell us:

Have you ever had something go wrong on a vacation—or have your vacations always gone smoothly?

Email ThisBlogThis!Share to TwitterShare to FacebookShare to Pinterest
Labels: A Deal With The Devil, From Paradise... to Pregnant!, Kandy Shepherd, Louisa George, Sunday smooch