Today we welcome Jennifer Hayward to LoveCats DownUnder but first...

The winner of last week's Sunday Smooch Giveaway is Tammy.  Can you please contact melaniemilburne (at) gmail (dot) com to receive your copy of Italian Surgeon to the Stars.

And now for today's Sunday Smooch from Jennifer Hayward's Tempted by Her Billionaire Boss. 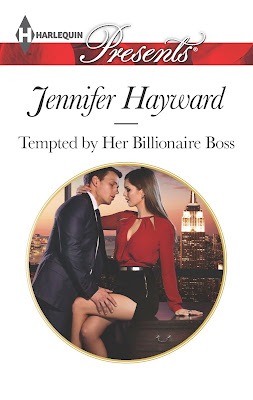 
Harrison is furious. He can't afford any distractions with a high-stakes deal on the table, and his new assistant is as diverting for her beauty as her incompetence! He should fire her, but she's determined to make up for their disastrous meeting by anticipating his every need. Except, what Harrison's beginning to want from Francesca isn't part of her job description!


Tempted by Her Billionaire Boss is the first of my Tenacious Tycoons duo for Harlequin Presents. The Tenacious Tycoons is the story of two brothers who must carry the family legacy after their father commits suicide over a deal gone bad. Harrison, my hero in Tempted is the dark to his brother Courn’s light, bent on avenging his father’s death. Frankie my clear-souled heroine might be the only thing to save him from self-destruction.

This kiss follows Harrison and Frankie’s break up after Harrison pushes Frankie away, worried she’s getting too close. At the annual Grant summer party – the social event of the season in Long Island - Coburn decides to make his brother admit his feelings for Frankie with an intimate display on the dance floor. All bets are off as to how this is going to end!

“You don’t want me, Frankie.” He kept going as if he hadn’t heard her. “Tell yourself that. You want a tidy little relationship with a nice guy who will treat you well, give you the requisite two-point-one kids and take you to church on Sunday.” He shook his head. “That’s not me.”
“I never said that.” A funny feeling unfurled inside of her. “Why don’t you tell me what these feelings are you’re having before I make a decision like that?”
He shook his head, a wary look in his eyes. “It won’t accomplish anything. I have nothing to offer you.”
Frustration burned through her. “I swear I will turn around, go back up there and find one of those eligible men and flirt like crazy if you don’t start talking.”
His throat convulsed. For a minute she thought he was going to walk away. Then he took the last step toward her, his gaze dark and tormented. “You make me want things I can’t have.”
“Like what?” She was hypnotized by the confusion in his gaze. The honesty.
He cupped her jaw in his hands. “You make me want you. Need you. Crave to be with you. I don’t do relationships. That’s why I walked away. Not because I don’t have feelings for you.”
Having his hands on her again felt so good. She wanted to purr into him like a cat. Her gaze held on to his. “Maybe you don’t know what you’re capable of.”
“Even if I was,” he said harshly, “you are goodness, Frankie. I am the darkness. I would only drag you down there with me.”
She moved closer because she was melting inside. “I can handle myself quite nicely, Harrison. I did the other night.”
He looked down, as if he was studying the heat drawing them together. “You can’t handle my life as it is. With Leonid. Siberius. I could be walking into a whole other playground in a few weeks, one I’m sure you couldn’t handle.”
A presidential campaign. Rumors had been swirling all night about it. Everyone expected him to do it. But she didn’t care about that. She cared about the man.
She swallowed hard. “That night at your penthouse...I’ve never felt like that about anyone. I’ve never had that kind of a connection with anyone. It was—” She shook her head, stumbling over the words. “My feelings are scaring the heck out of me, too, Harrison. I don’t know how to handle them. But I won’t deny them.” Her gaze clung to his. “You said I make you feel alive...you make me feel alive.”
His gaze darkened. He was silent for a long moment, long enough for her to hear her heart beating in her ears. “You’d be smart to walk away. If I don’t break your heart now, I will later.”
“You don’t know that.” She stepped closer until the heat of their bodies melded into one another. “There are no sure things in life. You can’t insulate yourself against pain. It’s impossible.”
She thought she might see a flicker of awareness in his eyes. That she was right. That he’d been locking his feelings away for far too long. Her heart thrummed in her chest as he brought his mouth down to brush against the corner of hers.
“There are far better bets than to take a chance on me. I’m not going to lie.”
“I don’t think so.” Her soul reached out for his. “Let yourself go. Follow your instincts. I’ll jump if you will.”
He murmured something unintelligible against her mouth. Sparks flew between them, their bodies too close, too aware of their wanting not to seize it. Take it. His mouth shifted to cover hers more fully. She moved into him, like water finding a path again. After the uncertainty of this past week, she wanted comfort. She wanted to know she was right.
He kissed her hard, his mouth hungry, lacking in finesse. She had pushed him out of his comfort zone. His hands moved restlessly down to shape her breasts, the curve of her thighs through the silky material of her dress. “You look so good in this,” he muttered when they came up for air. “I almost knocked Coburn senseless.”
She smiled against his mouth. “He was provoking a reaction.”
“He succeeded.” The hand that shaped her hips pulled her hard against him. His arousal lay between them, potent and ready. Frankie gasped. “Harrison.”
He grabbed her hand and walked toward the boathouse. She tugged on his fingers in a halfhearted protest. “Not here.”


“You wanted me to go with my instincts. Live with it.” 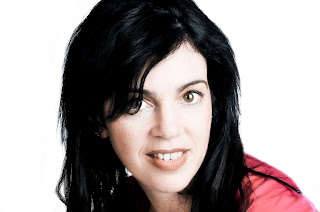 To be in the draw to win a signed copy of Tempted by Her Billionaire Boss, share what's been tempting you this weekend.

Come back next Sunday, when the winner of today's giveaway will be announced and a smooch from the amazing Amy Andrews will be posted!