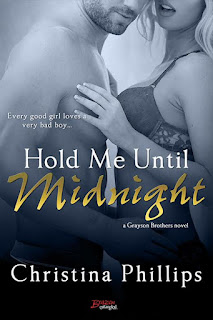 Please help me welcome a friend of the Cats to the blog today, Christina Phillips! Christina is here to talk about her new book Hold Me Until Midnight which has just come out with Entangled Brazen. It sounds like all kinds of fun, and I'm off now to download a copy of my very own. But first, a sneak peek at her new book:


Hold Me Until Midnight (The Grayson Brothers, Book 1)

Scarlett Ashford needs a date for her father’s wedding. Only she doesn’t just need a guy in a suit—she needs a bodyguard. The only problem is that Jackson Grayson is big and gorgeous and way too sexy. So much so that Scarlett’s tempted to let this hot bad boy ruin her oh-so-good reputation…

Jackson doesn’t do relationships and he certainly doesn’t sleep with clients. Yet he can’t fight their inconvenient attraction, or how badly he wants Scarlett’s warm and wicked curves against his body. He wants her. Now. Even if it’s just for one night, and even if walking away the next morning isn’t as easy as he thought.


Besides, one hot and incredibly intense night between a bad boy and a pampered princess could never turn into something real…could it?


1. Hi Christina! You're known for your sexy historicals (have I told you how much I loved Forbidden?), but now you're releasing your first category romance. Was it a big jump to change the type of books you're writing or did it come naturally?

Thanks so much Rachel! I'm thrilled you enjoyed Forbidden :-) It's funny because when I first started writing, I wrote short category romances aimed for Mills and Boon, so in a way I've come full circle. On 1st April last year I was approached by Escape Publishing to see if I'd be interested in contributing to their Secret Confessions: Sydney Housewives continuity. I definitely was, and I had so much fun writing Willow. So that got me back into writing sexy contemporary romance, and from there I was contracted for three books with Entangled Publishing's Brazen imprint. I also wrote a contemporary novella about a hot sheikh, which is part of the boxed set with Cathleen Ross and Mel Teshco, Taken by the Sheikh. However I do still love my historicals and am in the process of claiming the rights back on those books and will republish them as soon as I possibly can!


2. The hero of Hold Me Until Midnight, Jackson, is one of three brothers - I love a series of books about brothers! Tell us a bit about the Grayson men.

The Grayson brothers survived a horrific childhood with their brutal father, and as a teen Jackson became a street fighter, involved in illegal gambling so he could help out his family. None of the brothers believe in love or happily-ever-after, and although they now own a successful bodyguard and security business the legacy of their past haunts each of them. It's only when they each find their heroine that they can face what happened when they were young teens and finally come to terms with the traumatic event that shaped their lives.

3. Most of us know about your love of Clive Owen and Henry Cavill from following you online. Did you have anyone in mind when you wrote Jackson?

Ah yes, my darling Clive and Henry! It's funny but I never really have a particular actor in mind when I'm writing my heroes. Although to my surprise as soon as Scarlett saw Jackson she had very definite ideas of who he reminded her of! A dark haired Thor as portrayed by Chris Hemsworth (I think it was the biceps that did it...)


4. Scarlett hires bodyguard Jackson to protect her at her father's wedding - I love that premise. Do you have any favourite movies about bodyguards?

One of my favourite bodyguard movies (and love stories as it happens) is the original Terminator movie when Kyle Reese is sent back in time to protect Sarah Connor - even though he knows it's a one way trip and the chances of him surviving are grim. But he's been in love with a photo of Sarah for a long time, and is willing to risk everything to save her *happy sigh*

5. Can you give us a sneak peek into the book?

Well, I thought it would be fun to show the moment when Scarlett first sees Jackson!

Scarlett stood, and then forgot how to breathe.

The man before her, taking up more space than any mortal had any right to, was over six feet tall, with muscles filling out his black tee to the point of indecency.

Her mouth dried as she dragged her fascinated gaze up from his biceps. Don’t think about his biceps. She focused on his stubble-darkened jaw instead, but that didn’t help. She’d never gone for the unshaven look before, but to hell with that.

Stop staring at him.

The gossip at work hadn’t done him justice. He was so right for her purposes it was unnerving.

“I’ll leave you to it then,” the girl said. Scarlett had completely forgotten about her. She tried to ignore Jackson’s messy black hair, which brushed his collar. And failed.

Thor’s body. Loki’s hair. Could it get any better?

Yes, it could. Even his voice dripped with sin. Dark and dangerous with a hint of deadly menace. Darts of pleasure stirred in places she’d almost forgotten she had.

How was that even possible? They hadn’t even touched, and she was more turned on than she’d been in ages.

The click of the shutting door cut through her lustful thoughts.

Pull yourself together.  She was here on business.  Jackson Grayson would never take her seriously if all she could do was drool over him.


6. Hey, I'm hooked already! Thanks for sharing. Now, what was the last great book you read?

I can't answer this question! I've been reading so many great books lately :-) I'm on a bit of binge of Entangled books at the moment!

I'm just about to start Joan Kilby's Turning the Tables, her second Brazen which was released the same day as mine. Can't wait!

Thanks so much for having me on LoveCats today, Rachel!

Good news is that Jackson is the middle brother. Youngest brother Cooper's book is coming in September 2015 and eldest brother Alex's HEA in January 2016. If you want to connect with Christina, have a look at these places: Website, Facebook, Twitter, Goodreads, or Sign up to receive notification of when her next book is released.

And since we've been talking about stories with bodyguards, I'm curious - does anyone else have a favourite book or movie with a bodyguard? I think I'm in the mood to read and watch some!