The greatest gift of all...
The sleepy town of Havelock is the last place Dr Jenny Bostock wanted to get stuck over the holidays. Her whole trip was designed to escape the heartbreak of a family Christmas. But when adorable twin boys crash into her on the skateboards - closely followed by their stressed-out (and seriously sexy) single dad, Dr Cameron Roberts - Jenny's forced to put her travelling plans on hold. And the longer she stays with Cameron and the twins, the harder it is to leave... 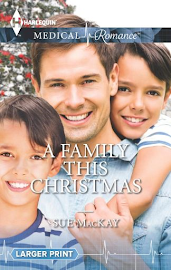 The scene setup -
After a previous disastrous attempt to cook the family dinner Jenny has had help from a friend of Cam's, and diner's been a success. But Jenny knows she's supposed to be arranging to move on, the sooner the better, despite still being on crutches with a broken ankle. Funny but every day she keeps putting off leaving for another twenty four hours.


Cam's gaze followed her hands as she rubbed up and down, working her fingers into the tight muscles. He swallowed hard and pressed his lips tight. The plates in his hands banged onto the bench. She bit down on the reluctant smile about to break across her mouth. It wouldn’t do for him to know she’d noticed his reaction. They couldn’t follow through. Because of the children. Because she wasn’t ready. Because she was leaving and flings, even very short ones, weren’t on her agenda. But that didn’t mean she couldn’t find some sweet pleasure in having him a little bit attracted to her.


He made her feel alive again, reminded her she was a woman, not just someone traipsing the country looking for forgiveness and the incentive to return to medicine.


The only person who has to forgive you is you.


The salt and pepper shakers dropped from her hand onto the table with a bang. What? Where had that dumb idea come from? Not her, that’s for certain. Mum and Dad must hold her responsible for Alison’s death. Didn’t they? They’d never come out and said so but she’d been the only person there when it had happened so, of course, she should’ve been able to do something to save Alison.


‘Jenny? What is it?’ Cam was at her side, pushing her gently back onto the chair she’d just risen from. ‘What’s going on?’


She snapped her mouth shut before she could spill the words that would tell him what a dreadful sister she’d been, not to mention a useless doctor. That would certainly remove any hint of attraction he might feel for her, and she really didn’t want to lose that. Not yet. In a few days’ time when she went away she’d deal with that. But not tonight. Not now. ‘I’m fine. Just moved too fast and cricked my ankle.’


Cam made his usual move and pressed a finger under her chin, raising her face so he could lock eyes with her. ‘Try again. I don’t believe it.’ There was nothing but concern and compassion looking out at her, but she wouldn’t fall for it. She had to be strong. Despite telling him about the accident that had taken Alison, she’d not filled him in on all the gruesome details and she wasn’t about to start. They were her horrors to deal with, no one else’s. Especially not this man’s, who’d done nothing but show her kindness.


Pushing his hand aside, she stood again. ‘Then we’ll have to agree to disagree.’ Snatching up the salt and pepper, she slipped past him into the kitchen and started rinsing off dishes. Please go and find another chore to do, preferably one in another room. Leave me to myself for a bit. I’ll come right quicker that way.


But when she turned around Cam stood right there in front of her, that concerned expression on his face changing, morphing into…? ‘What?’


‘Jenny.’ His hands touched her cheeks, oh, so lightly. ‘You’re beautiful,’ he whispered, as he moved his head closer.


This wasn’t what she’d meant when she’d wanted him to find another chore. This was… She leaned closer. This was… The air seemed to vibrate between them. Those brown eyes were locked on hers, watching, waiting, wanting. This was—is—right.


Her mouth brushed those lips she’d been dreaming for days of kissing. Brushing her mouth over Cam’s wasn’t enough. Hunger gripped her. Thankfully Cam began kissing her properly, hard and soft, demanding and giving. Knee-buckling sensations tore through her like wildfire. Heat rose to warm her face. Wrapping her arms around him, she held on for dear life, kissing him back as hard and soft, as demanding and giving as he kissed her. His mouth was hot, hot, hot. His hands on her waist were hot. His chest pressing against her breasts was hard and hot.


And lower down something else seemed to be heating up too, definitely hardening if that bulge pushing into her stomach was anything to go by. How did two mouths touching cause wild reactions south of their waists? Because right in her centre that heat had turned molten, setting her muscles to squeezing and her hormones dancing.


Cam set her back from him so fast it took a moment to regain her equilibrium. Marcus and Andrew. Oh, hell. Now they’d blown it. What were the boys going to think about this? A quick look at Cam told her he already regretted coming near her. The heat suffusing her body rapidly chilled down to cool. Great. She’d definitely be packing her bag now. Hopefully Cam would wait until the morning before kicking her out on the street.


Come back next Sunday, when the winner of today's giveaway will be announced and  the next smooch will be posted!
Posted by Sue MacKay