Last month I told you about my first gloriously messy day in Munich. Today I’m going to tell you about 2 other truly exciting days that will remained marked in my memory for evermore. :)

DAY 3
Today the DH and I strode out to pay homage to two very different monuments. Our first stop was Schloss Nymphenburg (btw schloss is German for palace). This was the summer palace of the Bavarian rulers. Now I’ve visited the odd schloss before (sorry, I love that word. I developed an odd verbal tic where I kept saying it out loud over and over), but I hadn’t done any research so when I first clapped eyes on the place, I just stood there with my mouth open catching flies.

Maybe you’ll sympathise when you see it. This first pic is from the long avenue leading up to the schloss. 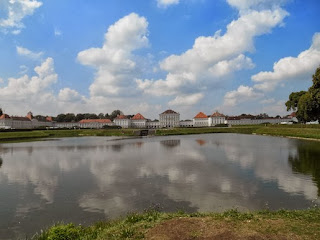 This one is closer, obviously, and of the main part of the palace (there are wings to either side, identical...and endless :-) ) 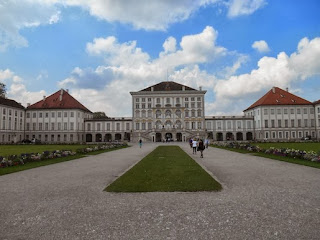 This is looking back the way we'd come. Not a bad view, huh? 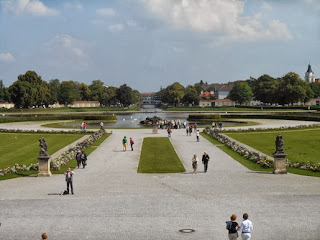 So the palace is modelled on Versailles, which I haven’t seen, and is utterly amazing and decadent. But then there were the gardens. I swear I could’ve spent all day exploring those. In fact we explored so hard we had to stop at the café to fortify ourselves before our next adventure.

This is the main garden avenue, but off behind the trees to either side are more avenues, less grand, but leading to wonderful things like chapels and pavilions (and a coffee shop). The woods were lush and lovely...and cool for this very warm day. 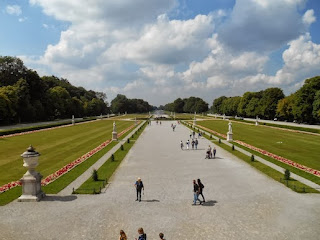 And this is the view looking back at the schloss. The garden borders and statues were wonderful. 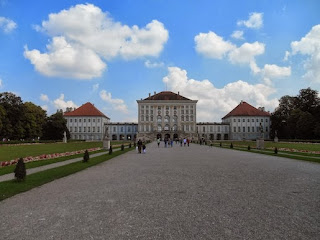 Our second stop for the day was Allianz Arena, which, according to the DH is home to one of the mightiest football teams in the world—Bayern Munich. I like football so I was more than happy to walk for kilometres to get to the arena and then climb stairs to view the arena…and eat ice cream before heading back to the train station again. But check the arena out. I think it looks like a giant UFO. 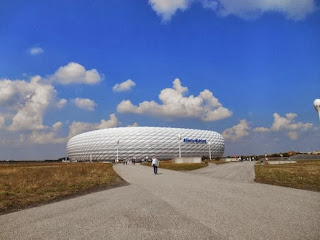 DAY 5
I’ve always wanted to be in the middle of big mountains. I mean BIG MOUNTAINS. And seriously they don’t get much bigger than the Alps. So on our last afternoon in Munich we caught a train to Garmische-Partenkirchen (I developed a bit of a verbal tic over that one too). It took an hour and twenty minutes and we passed the most beautiful lakes. Sigh. Not to mention forests full of Christmas trees!

So we reach the end of the line—Garmische (for short ;-) )—and we went for a stroll and I did that whole mouth-open-in-awe thing before a grin plastered itself across my face and refused to leave. The winter Olympics have been held in Garmische and it’s home to Zugspitze—the highest point in Germany. One can catch a cable car to the top, but we didn’t bother with that. The point wasn’t to go to the very top, it was to experience the feeling of being surrounded by mountains and while this coastal girl lapped up the experience, I have to say it felt very odd.

It was so warm there wasn’t a speck of snow on even the highest peaks. I couldn’t believe how wonderful it smelt either—a faint mix of cut grass  and lavender. We found a beer garden where we ate black forest cake, drank beer and lapped up the view. Amazing. Utterly amazing.

I  don't know how to mark a photo with an X but Zugspitze is in this photo. 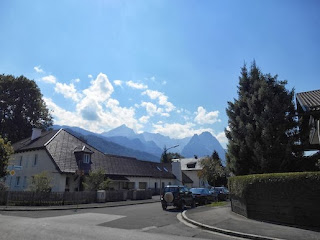 I fear one loses the grandness and majesty of the scale in photos. But it truly was an awesome sight. 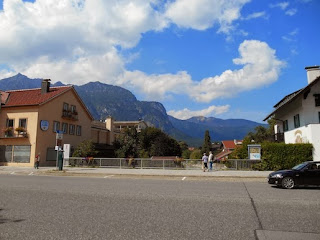 I've never been at this high an altitude on land before. My fingers and feet swelled up. 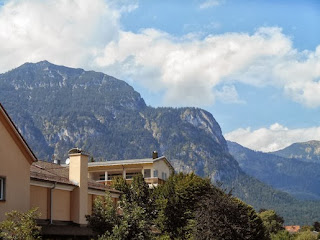 Love, love, love these chalets! The entire street was lined with them. 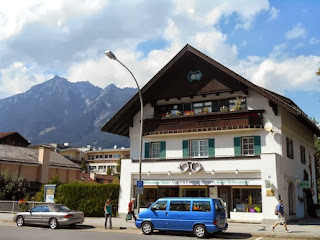 This is the town hall...with mountains in the background. :-) 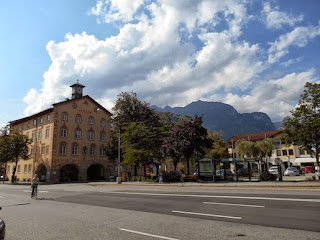 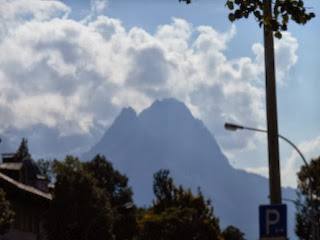 Can you see how happy I am that I had the chance to spend an afternoon in the Alps? 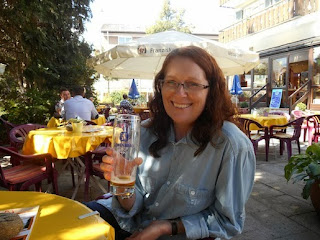 Promo alert! My latest release, The Redemption of Rico D'Angelo is out this month and it's set in another spectacular location -- Tasmania. So, tell me, what's one of the most spectacular sights you've ever seen?