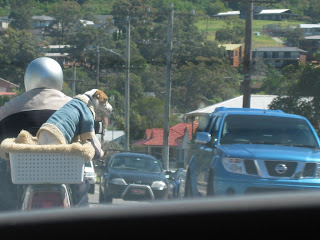 As you can see by these of photos, my post was inspired by someone I saw recently. Before you wonder, no, I wasn't driving the car at the time. I was a front seat passenger and for a change I had my camera with me just at the right time! Isn't this pooch cute?

It got me thinking about how we don't like to leave our furred family members behind. I've seen middle-aged men cycling down suburban streets while their dog runs alongside, probably keeping the pace slow so their 'master' can keep up. I've seen tiny, tiny dogs in the baskets of push bikes. I've seen a teenager hoon along the bike path not far from us, standing on a skateboard while pulled along by his cattle dog. 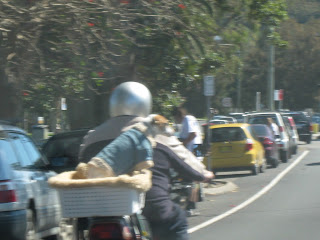 Admittedly I've only seen a dog in a handbag on a film, but I have seen a small canine head poking out of a backpack.

I've met people out walking in Europe, with their ferret draped around their shoulders, taking the air together. Also in Europe, I recall walking into cosy German pubs on cold days to find half the space under the table taken up by a snoozing dog. 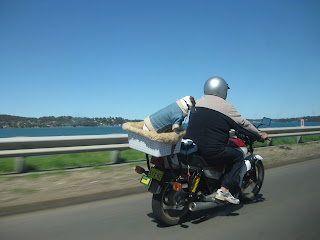 I can't recall seeing anyone travel with a cat, except to the vet, but I'm sure it happens.

How about you? How do you cope with leaving your furred family members or don't you? Have you had adventures travelling with them? What's the strangest way you've seen a pet travel? Maybe you have an interesting animal travel experience to share. Or if you've never travelled with an animal, maybe you've encountered an interesting one on a trip.

Because it's a miserable winter's day here as I write I've decided it's time to spread some cheer. I'll give a signed copy of UNDONE BY HIS TOUCH, my current release, to someone who leaves a comment. I'll post the winner's name here before the next post goes up so do look out for that announcement.