Sunday Smooch: Made For Marriage


Today we have a smooch from Made For Marriage by Helen Lacey but first ...

the winner of last week's Sunday Smooch Giveaway is -- CATHERINE!

and she'll send you a copy of Once a Good Girl.

And now for today's Sunday Smooch from Made For Marriage by Helen Lacey ..... 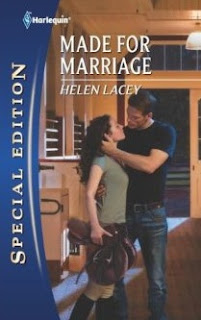 Equestrian Callie Jones was used to difficult parents at her riding school. But Noah Preston took the cake. How dare he question her teaching abilities, after his headstrong daughter paid no heed to rules—her teacher’s or her father’s?

Single dad Noah was ready to apologize for overreacting. But he wasn’t sorry for the way the stunning American riding instructor made him feel. And he soon learned that there was more to Callie than her smarts, sass and fire: a shattered heart that threatened to splinter even further. Could he make her see that he—and his family—were for keeps? 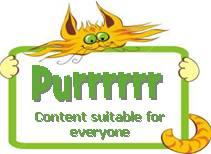 [Set-up: Callie has retreated to the stables after Noah left the riding school where his eldest daughter is having lessons. She'd spent the previous evening with him and his children - and knows she is getting in deep. They'd argued earlier that afternoon about her reluctance to get too involved]

She was glad when she heard Fiona’s car pull up outside and called for her to join her in the tack room. Only it wasn't her friend who stood in the doorway a few moments later. It was Noah.
He was back. And he clearly had something on his mind. Callie got to her feet quickly. Her heart pumped. “Did you  . . . did you forget something?”
He stood in the doorway, his eyes locked with hers. “Do you still love him?”
She was poleaxed. “What?”
Noah was in front of her in three steps. “Your fiancé. Do you still love him?”
“He's dead,” she whispered.
“I know. But that wasn’t the question.” He reached for her, slid one arm around her waist and drew her against him. “The thing is,” he said, holding her firm. “If you still love him, I’ll do my best to stop . . . to stop wanting you.” His other hand cupped her cheek, gently, carefully. “But if you don’t love him, then I’d really like to kiss you right now.”
Her insides contracted. “No,” she said on a breath.
“No?”
“I don’t love him.”
His green eyes darkened as he traced his thumb along her jaw. “Good,” he said softly.
And then he kissed her.
Callie let herself float into the warmth of his mouth against her own. It was a gentle possession, as if he knew her, as if he'd been kissing her forever. Only one other man had kissed her before this, and as she allowed Noah’s lips to part hers, any recollection of that faded, and then disappeared. He didn’t do anything else – he just kissed her, like he couldn’t get enough of her mouth, her taste, her tongue.
Instinctively, Callie’s hands moved along his arms and to his shoulders. She touched his hair, felt the silky strands beneath her fingertips and slanted her mouth against his. Finally, when he lifted his head Callie felt so much a part of him she swayed towards his chest. Noah held her still, one hand on her shoulder while the other splayed on her hip and she lifted her chin higher to look into his eyes.
“Noah – I think . . .” Callie willed herself to move, but found such incredible comfort in his arms she simply couldn’t.
He didn’t let her go either. “You think too much. How about you stop thinking and just feel.”
Feel? Oh, how she wanted to just feel. But her doubts tormented her, taunting around the edges of her mind in a little dance, telling her that taking meant giving. And giving was . . . giving felt as far out of reach to her as the stars from some distance planet.
He leant into her, like he knew her fears. “I’d never knowingly hurt you, Callie.”
In her heart she knew that. “But . . . but I might hurt you.”
“I’ll take that risk.” He kissed her again, long and slow and deliciously provocative.
Heat radiated through him, scorching her and Callie wondered if she might melt. Kissing had never felt like this before. Nothing had ever come close to this. He was strong and safe – a haven for her shattered heart.


Come back next Sunday, when the winner of today's giveaway will be announced -- and a smooch from One Perfect Night by Rachael Johns will be posted!
Posted by Robyn Grady

Email ThisBlogThis!Share to TwitterShare to FacebookShare to Pinterest
Labels: Helen Lacey, Made For Marriage, Sunday smooch