Today we have a smooch from The Return of the Stranger by Kate Walker, but first ...

The winner of last week's Sunday Smooch Giveaway is --
Kylie!

Rachel (at) RachelBailey (dot) com, and she'll send you a copy of Return of the Secret Heir.

And now for today's Sunday Smooch from The Return of the Stranger by Kate Walker ... 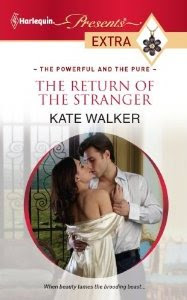 Standing high on the windswept moors, the lone figure of Heath Montanha vows vengeance on the woman who destroyed the last fragments of his heart...

Lady Katherine Charlton has never forgotten the stablehand with dangerous fists and a troubled heart from her childhood. Now the rebel is back, his powerful anger concealed under a polished and commanding veneer.

When ten years of scandal and secrets are unleashed, with a passionate, furious kiss, Heath's deepest, darkest wish crystallises...

[The set up...] Return of the Stranger was written as part of a special mini-series using classics of romantic fiction for inspiration and as a springboard to create a new, modern story. So it is the story of Heath Montanha and Katherine (Kat) Charlton.

When they were young, Katherine was the daughter of a local land owner and Heath, the orphaned foundling that her father found in Liverpool and gave home to where they both grew up. But when Kat’s father died, her brother Joe treated Heath appallingly and when Katherine became more involved with Arthur, the son of Lord Charlton, Heath walked out and left to make his fortune.

Now, ten years later he is back, looking for revenge on the man who treated him so cruelly and to see again the woman who had taken his heart and broken it into tiny pieces. He plans to take one look and the walk away, but finds he just can’t do that. As this extract reveals, he kisses her three times in the early part of the story – once in hungry demand, once deliberately seductive. . . . and now this kiss which changes everything.

And he was moving, she realised hazily. She hadn’t noticed him take action but he was coming closer, slowly, steadily, almost imperceptibly. He was taking one step and then another, and another . . .
She should back away, get out of his reach. She told herself that she wanted to back away, but her body refused to obey her, Instead she stayed exactly where she was, feet firmly rooted to the ground, her breathing fast and shallow, her heart thudding heavily inside her chest.
‘Now how shall we do this, namorada.’
‘We . . ? '
We won’t be doing it at all, she meant to say, but the single syllable was all she could manage. It seemed that as she spoke she took in the scent of him on the air, her mouth remembered the taste of him and wanted more.
‘We . . .’ she said again and it was just a sigh.
‘We . . .’ Heath agreed, nodding his dark head. ‘Because it is ‘we’, isn’t it, my lovely? It is the two of us. Not just you or me – but the two of us together , making more than ever apart. We.’
The last word was spoken as his head lowered to hers, his mouth taking hers so that she swayed against him, hunger weakening every limb so that she needed his strength to hold and support her as she melted into him.
Three kisses. They had shared only three kisses in all the time she had known him, and yet each kiss had been so very different, so unique, so totally unlike each other that Kat felt as if she had experienced a lifetime of caresses from this man.
The first, here in this hallway one the day he had come back into her life, his kiss had been like being in the eye of a burning storm. The flaring passion had taken her and dropped her right into the heart of an inferno where she had thought that she would be burned up to ashes before her heart could even take another beat. Then the slow, seduction of that second had melted her senses, leaving her half out of her mind with the sort of sensual awakening that had filled her whole body with hunger and yearning.
But this kiss was another new experience. And even as his mouth touched hers she knew that this was the kiss that had the potential to break her heart. It was the kiss she had dreamed of, longed for. The kiss she had been waiting for all her life.
Kissing Arthur - and being kissed by him – had been like kissing an enthusiastic boy, clumsy, endearing, excited, but somehow lacking in finesse. She had thought it was just the start of things. That it was bound to get better, but instead it had come to lack even more - but lacking what she had never known until now. She had taken the blame for it because she hadn’t known any better. Until that first kiss from Heath had shown her how it could be between a man and a woman.
How a man should kiss a woman.
This was a man’s kiss. And she received it as a woman, knowing that the feelings it stirred in her were the richest, deepest, most feminine emotions possible. It was a kiss that opened her mind and her senses to new sensations to heat of skin, the scent of his body, the strength of taut muscle, and the taste of his mouth on her, hard and soft in the same moment, moist and warm and totally personal.

The Return of the Stranger is available now in Australia and New Zealand as a Sexy and NA as a Presents Extra. To be in the draw to win a signed copy as well as two books from Kate Walker's backlist, just tell us which are your favourite classic romances?

Come back next Sunday, when the winner of today's giveaway will be announced -- and a smooch from Tempting the Negotiator by Zana Bell will be posted!
Posted by Robyn Grady