I have two books on the go at the moment. Annie West’s Sheikh’s Royal Baby Revelation and Ben Aaronovitch’s Moon Over Soho. They’re both absolutely wonderful. I also just finished Joanne Harris’s The Strawberry Thief, which was glorious. I’ve been reading so many fab books this year. :-) 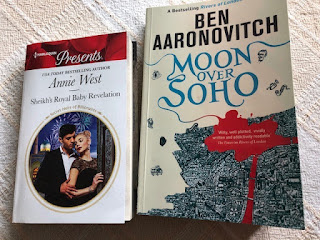 Nothing new. But I did re-watch Ladies in Black on the weekend. Such a gorgeous movie. I love the character of Magda so much. I might watch it again just in the interests of tracking her character development. :-) 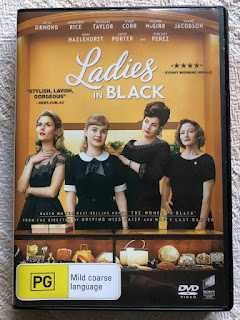 An earworm! And this one has been hard to shake. When I was in New York—in an elevator no less—Hall & Oates' Kiss is on My List was playing…and it went round and round and round in my head for the rest of my stay. On the plane on the way home, a Best of Hall & Oates playlist was available on the entertainment system.  I thought listening to it might shift the song. It did, but only to replace it with Say it Isn’t So. Now I don’t mind the song—and I am a teenager of the 1980s—but enough is enough. Therefore I won't link to the youtube video because I'm guessing you don't need it in your life...but just excuse me while I go and listen to it again.

So many things are making me smile—the rain, the rosellas, my work-in-progress, and my New York Public Library Card! However, my biggest smile is being reserved for my TBR pile. Here’s a sample of what’s up next for me (in no particular order):
* Kate Atkinson’s Big Sky which is the next in the Jackson Brodie series
* A Man Called Ove which is my next book club book
* First Grave on the Right by Darynda Jones (I went to her workshop on humour in New York and really enjoyed it).
* The Flatshare by Beth O’Leary (heard so many good things)
* And Amy Andrews’s Nothing But Trouble. This has been on my Kindle since it released, and I’m dying to get to it. :-) 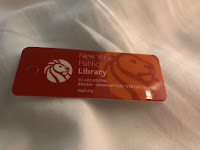 Okay, your turn? What are you reading / watching /listening to, and/or what’s making you smile today?

Email ThisBlogThis!Share to TwitterShare to FacebookShare to Pinterest
Labels: michelle douglas, sweet romance, What are you reading?