Today we have a smooch from Amy Andrews but first ... the winner of last week's Sunday Smooch Giveaway is Pammie!


Pammie, can you please contact Fiona on fiona (at) fionalowe (dot) come to receive your prize!


And now for today's Sunday Smooch from Hanky Spanky Christmas....

Amy says - this is a Xmas novella that came out a couple of years ago now but, it is the festive season, right? Click on the cover and it'll take you to the Amazon page! 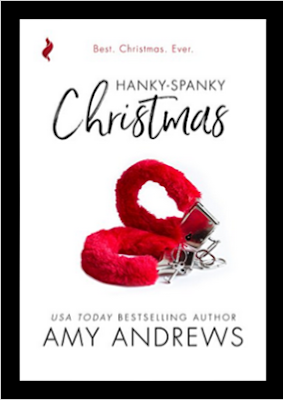 T'was the night before Christmas....

With a sudden hankering to be spanked, Darcy Henderson figures Mitch Callaghan is the man for the job. But is she woman enough to take it?

Darcy has just discovered which bar her sexy neighour (they're the only 2 young people living in a Melrose Place-esque retirement complex for seniors) Mitch Callaghan, works at when he goes off to work every night. And it's a kink club! Her and her friends have gone for a little voyueristic fun and games but Darcy has liked what she's seen - she's liked it a lot. So much so that she stayed on after the others have left accepting Mitch's offer of a drive home. Which is just as well becasue she's imbibed one too many Callaghans (his families secret cocktail recipe)....The scene picks up after they've arrived home and they're both just out of the car.

Tonight was the first night he’d seen Darcy in anything other than baggy clothes or her black one-piece and she hadn’t disappointed. She was wearing some kind of leopard-print wrap dress that clung to her hips, thighs and ass, crisscrossed her cleavage and seemed to only be held together by a bow tied at the side.

It made him want to pull it to find out.

Her normally straight hair was a mass of long, loose curls that fell down her back and swung in time with her hips. And then there were those heels, lifting her somewhere closer to his own height, although he still had her by a couple of inches.

“You know what?” She was walking again, although not quite in a straight line. “We should go out dancing somewhere.” She performed a sudden pirouette which would have landed her on her ass had he not been there to catch her.

“Okay.” He laughed and tucked her into his side as he walked with her. ‘You’ve got to be at work in four hours, remember?”

“Ugh.” She shuddered. “Should never have agreed to take Stacy’s shift.”

“Too late now,” Mitch said as they walked under the arch.

The aroma of hibiscus from the multiple planters situated around the pool and between apartments, tickled his nostrils. The twelve foot Christmas tree Mrs T had insisted he secure right in the centre of the courtyard, rose like a giant bloody phallus. It was as out of place in the December heat as Darcy had been drinking Callaghan’s at a fetish club.

“I’m going to come back to Fine Lines.” She poked him in the chest as they turned towards their apartments.

He chuckled. “Most people don’t.”

They passed his apartment as he walked her another ten paces to her door, festooned with a lush green wreath. “Here we are.” He dropped his hand from her waist lest he be tempted to crowd her back and do the kissing this time. Darcy may be cute as hell when she was tipsy but there was no way he was taking advantage of her liquored-up state.

Although, hell, if she wanted to lay one of those messy-hot, liquored-up kisses on him then he wasn’t going to stop her.

She leaned back against the white stucco wall beside her door, her breasts thrust out nicely. “In my bag.”

When she made no attempt to retrieve it, he took her bag out of her fingers, zipped it open, found her keys and shoved them in the lock. Then he reached for her phone. “What’s your code?”

“I’m going to set your alarm in case you forget to.”

“Good idea.” She nodded and prodded him in the chest again.

“The code?” he prompted as her finger took to stroking instead of poking, brushing against his nipple.

He shot her a sceptical look. “Bullshit.”

“Nope. I swear. Sixty-nine, sixty-nine. The year both my parents were born. Easy to remember.”

For more reasons than one. After all, what was more memorable than one sixty-nine but two?

Mitch keyed the code in and tried not to put Darcy and sixty-nine together in his head, a feat that was near impossible while she was drawing maddening circles around his nipple. He shook his head when it worked then quickly navigated to her alarm and set it for quarter past seven.

Rather her than him. He planned to be tucked up in bed dreaming about sixty-niners at that time.

She dropped her hand from his chest and slid it onto the phone but didn’t take it off him. “I want to do that.”

Her words slammed into his groin with all the heat and intensity of a fireball. He’d seen plenty of people getting spanked (amongst other things) at Fine Lines. Clearly it worked for some, and Mitch was all for a bit of choose your own adventure when it came to sex, but he preferred it where everyone involved got off and no one was hurt in the process.

“Right.” He slid his hand on her hip and urged her off the wall. “I think you had one too many Callaghan’s. They kinda sneak up on you.”

She draped one arm around his neck and fisted her other hand in the front of his t-shirt as she settled against his body. Her breasts smooshed nicely against his chest as the sugary sweet smell of butterscotch took over from the heavy perfume of hibiscus.

His cock appreciated her move, even if it wasn’t what he’d been going for.

His cock appreciated that even more. “Oh you do, huh?” It was hard to keep the amusement out of his voice with a serious frown crinkling her brow.

“Because I work at Fine Lines?”

“Yup.” She gave an exaggerated nod. “And because of this.”

She yanked on his shirt and rose on her tiptoes, pulling his head down, going straight for the kill, sucking him in to a kiss that was hot, deep and wet right from the first touch of their lips. Her tongue boldly sought his and Mitch groaned.

His hands slid from her hips to her ass, tucking her in closer, her corresponding moan shooting like wildfire through his veins, setting fire to everything in its path.

She moved restlessly, hungrily, tantalisingly, against him and blood from every vital organ rerouted to his cock. If he didn’t pull away he was going to ruck her skirt up and fuck her against the stucco and that’d really give their neighbours something to talk about at the monthly unusual disturbances meeting.

There was a damn committee and meeting for everything around here.

Mitch gathered every skerrick of his rapidly diminishing self-control and wrenched his mouth away,
taking a step back.Neither of them said anything as they stared at each other, chests heaving. It was all he could do to breathe and remain upright.

“You need to get to bed,” he said eventually.

She nodded, her tongue running over her lips as if she was still trying to taste him, and he nearly reached for her hip again. “What about the...spanking?” Her voice was still breathy, her interest clearly still piqued.

He doubted she’d even remember this conversation in the morning.

“Ask me when you’re sober some time.”

He turned away then before her leopard-print dress brought out the animal in him. 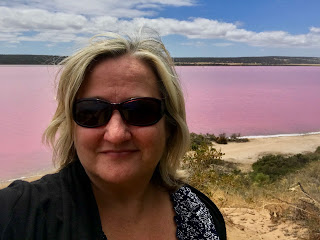 For a chance to win a digital copy of Hanky Spanky Christmas, tell me what's something a little bit thrilling and different you'd like to indulge in one day?

Leave your comment here or on the LoveCats Facebook page and then come back next Sunday, when the winner of today's giveaway will be announced and a new smooch will be posted!