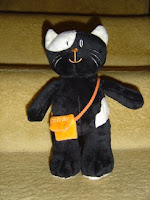 I recently had a mini romantic comedy DVD fest—all in the name of research, of course. I was looking for beta hero inspiration, and… Okay, okay. I was looking for some light relief from my thesis, so I turned to my film genre of choice: The Romantic Comedy. I watched The Proposal, which I adored. And then I asked my Facebook friends for recommendations. I spent a weekend watching these three:
* What’s Your Number
* 27 Dresses
* P.S. I Love You

I really really wanted to love What’s Your Number because my friends’ enthusiasm was so intense. And it’s a hilarious film, and I love the two leads, and they did belong together and… And I couldn’t get beyond the gender politics. Folks, this is what happens when you do a PhD on romance and feminism. I know the romantic comedy genre is supposed to be tongue-in-cheek and not to be taken seriously, but…

Simply put, the premise is if a woman has slept with 20 men (so a magazine article claims), she’s unlikely to ever find love, marriage, and a happy ever after. Guess how many men the heroine has slept with? That’s right—20. Her solution isn’t to blow raspberries at said magazine article. No, it’s to panic and not sleep with any more men, and to go back and check out all of the men she’s already slept with because Mr Right must be there somewhere. On the surface, the movie seemed to avoid slut-shaming. But… As this magical number 20 didn’t apply to men, the double standard was too glaring. And that made me mad. 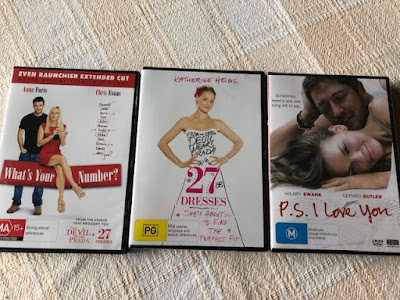 27 Dresses had more of an emotional hit without as much madcap hilarity. To my mind it’d make a better book than movie, because there were times when the heroine did things that seemed out of character and had me scratching my head. If I’d had access to her internal thoughts, though, I expect I’d have been more on-board. It was a lovely film, though.

I actually didn’t expect to like P.S. I Love You very much. I thought it’d be a bit too sentimental and saccharine. But it was my favourite of these three, and I’m looking forward to watching it again. In the interests of full disclosure, though, it wasn’t really a romance (and that might be a spoiler if you haven’t seen the movie—sorry). It was a story of grief and growth, and I loved that aspect of it. 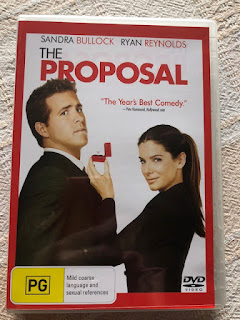 I didn’t love any of them as much as I love The Proposal. I’ve watched The Proposal twice now, and I think it simply holds together better than the other movies. It has an internal logic that’s compelling—everything follows on naturally from what came before which is a mark of good storytelling. The two leads are intriguing and ultimately likeable, and the heroine’s character arc is a joy to watch. It has a HUGE hit of emotion that made me cry. There’s a big sacrifice. There’s a big declaration. And there’s a happy ever after. And that’s pretty much what I want in a romantic comedy, be it a film or book.

What about you? Have you discovered a romantic comedy this year that you adored? Let me know, because I’d be super-keen to check it out. :)