Show Me Your Dogs! 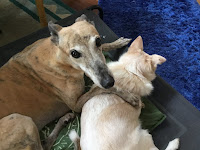 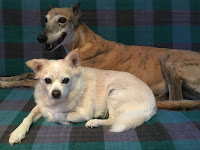 October marks one year since Twiggy and Alfie joined our pack (bringing our total number of permanent dogs to five). They came to us as a bonded pair when their human entered a nursing home, and they quickly wormed their way into our hearts. They're both 12-years-old, so they spend a fair bit of their days sleeping, and it's often together, as you can see from the photos. 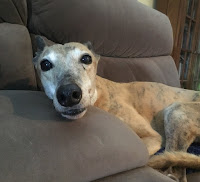 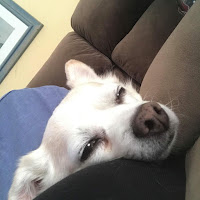 Twiggy is a greyhound and had a pretty rough life before landing with her previous human and Alfie, and she still has some after-effects of that, both physical and mental. But she's the sweetest girl in the world and, as I tell her all the time, she's so very precious. She likes to be near me, and she loves, loves her walks (we do two smaller walks a day in deference to the age of Twiggy and the others). She's also discovered a big love for peanut paste/butter - she has daily pain medication and I give them to her in a little peanut paste and it's become one of her favourite times of the day. 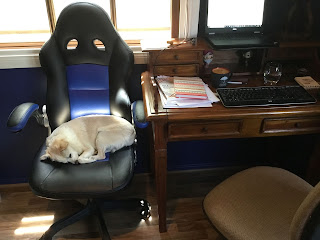 Alfie is a chihuahua x pomeranian and he's become my lapdog, filling a need I didn't know I had. He's on the bed at night (under the covers in winter), on my lap when I watch TV, and at my feet ALL the time (I'm going to do myself a serious injury one day, trying not to step on him!). After his humans, his next love is food (side note: he can't believe the tiny amount of food he gets compared to the mounds of food the greyhounds get!). He also loves his walks, though he can be a bit tricky on the lead because he'll walk straight underneath a greyhound or two to get to a good smell and wind everyone's leads up in knots! 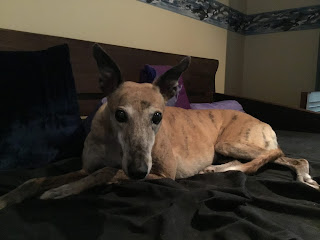 So to celebrate our one-year anniversary / gotcha day with these two sweethearts (seriously, I can't imagine my life without them now!), please show me a pic of your dog - past or present, yours or borrowed. Twiggy and Alfie love to share things with each other, so I can imagine they'd want to share their celebration with all the other dogs too!
Posted by Rachel Bailey