Today we have a smooch from Clare Connelly's July release for Harlequin Presents, Bound by the Billionaire's Vows.


But first the winner of last week's Sunday Smooch Giveaway is Linda Christie.

Please contact Amy Andrews to receive your e-copy of Playing Dirty (such a great read! I finished it in one sitting, you're going to love it!).

'I have a condition…' Can she agree to her husband's terms?
When heiress Skye learns her marriage to Matteo was built on lies, she demands a divorce. A pawn in his revenge, Skye's heart shattered when she discovered her husband's game. The clock is ticking; she needs his signature. But Matteo is not willing to let Skye go so easily – the price of her freedom is one last night together! 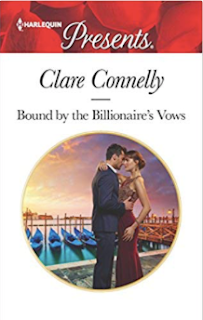 Skye wants out of her marriage. Her billionaire husband ruthlessly manipulated her into marriage just because she had something he wanted. But now she knows the truth, she wants a divorce... the only problem is, she's pregnant with his baby, and if he finds out, she knows he'll never let her walk away from him again!

Having succeeded in getting Matteo to sign the divorce papers, Skye is almost free, but an accident outside his office (she falls into a Venetian canal, whoops!) has her being rushed to hospital, where her condition becomes known. A concerned Matteo is by her side, wanting - needing - to know that she will be okay. That is until he learns that she's pregnant - and was trying to hide the truth of her condition from him! Worse, Skye had plane tickets in her handbag, to Australia, and he surmises - correctly - that she intended to not only run away, but to hide as well.

Desperate not to lose his heir, he rips up the divorce papers. She's his wife, and they're going to raise the baby together!

‘I don’t want to raise a child with you,’ she said with a determination that was somewhat belied by her quivering lower lip.
‘That is not your decision.’
Skye pulled a face. ‘We’re divorced, remember? Or as good as.’
Matteo’s mouth formed a grim line. ‘There will be no divorce.’ He reached into his pocket and pulled out the papers, tearing them in half with satisfaction, along with the contract for the hotel. The whole deal was off. This baby changed everything.
Skye’s eyes followed the soft ripping of the soggy paper then flew to his face. ‘You will not be flying out of Italy, taking my child with you.’
‘You can’t stop me,’ she snapped, wrapping her arms around her slender body, holding herself tight.
‘Like hell I can’t.’ He spoke coldly. ‘If necessary I will take this matter to the family courts today.’
Skye’s mouth dropped open. ‘You…can’t stop me from leaving. No court would make a mother remain in a country that she’s not even a born citizen of.’
He lifted a hand, silencing her with the simple gesture. ‘Perhaps not. But you had better believe I will have every reporter available covering the story. Our child will know, from as soon as he can read, that I foughtlike a dogfor him. That I wanted him—and you wanted simply to take him from me.’ He leaned closer, his face only inches from Skye’s. ‘I will fight for him with my dying breath. You will long for the days when we were married, rather than being in constant custody disputes in court.’
She shivered, his threat making her stomach roll. ‘You wouldn’t do it. You’re too private.’
‘There is nothingI wouldn’t do for my child.’
‘Then let-let me raise him,’ Skye stammered. ‘Let me raise our baby, because that’s best for everyone. And you can be…involved,’ she conceded, because she could clearly see she had no other option.
‘How involved?’ Matteo demanded.
‘You can visit. Several times a year. I suppose I can bring him to Italy when he’s older. We’ll work out a schedule.’ She said the word as though it was the miracle cure they desperately needed. ‘Christmas, birthdays, just like every other divorced couple.’
‘Your parents weren’t together,’ Matteo said with cold disbelief. ‘You told me that you hated feeling pulled from one to the other. Yet you’d suggest it for our child?’
Skye froze. He was right, of course. Though Skye hadn’t spoken much about her upbringing, she’d obviously given enough indication for him to glean the truth of her loneliness.
‘We’ll do it better than they did,’ she said softly.
‘We won’t do it that way at all.’
Disbelief scored her heart. ‘You can’t make me stay married to you. That’s insane.’
‘Insane is what you planned to do. Insane is planning to hide your pregnancy and baby from me. Hell, Skye, I cannot believe you thought, for one moment, that I wouldn’t find out.’
‘How would you have?’ she snapped. ‘This was just bad luck. If I hadn’t passed out…’
His eyes glittered with anger. ‘Yes?’
Skye’s cheeks were pale. ‘You would never have known. Ever.’
‘Because you were going to disappear into thin air and hide from me?’ He moved closer, his expression menacing. ‘And what if you met another man? Would you have married him? Raised my child with him? Would you have let my child, the Vin Santoheir, grow up with no idea of who he is? From where he comes?’
Skye was as white as a sheet and, in the part of Matteo’s brain that was working, he recognised that he should ease up. That he should give her a moment to breathe and reach her own conclusions. Only, Matteo had rebuilt the family empire by sheer determination alone and easing up on any of his adversaries was not something he believed in doing.
And Skye was his adversary—his enemy—not just by blood, but now also by deed. How could she not be, given the deception she’d been willing to practice?
‘Answer me, damn it!’ he demanded, and when she didn’t respond he grabbed her around the waist, pulling her body to his. Her lips parted on a wave of shock and he took advantage of the surprise, driven by a soul-deep instinct. He ground his mouth to hers, lashing her with his tongue, stirring her into the kind of frenzy that had typified their short, super-heated marriage.
It wasn’t just about possessing her. He wanted to possess all of her, to mark his claim on her as his wife, and as the mother of his baby. He wanted to claim their child. ‘This is my baby.’
Skye was frozen with shock but it didn’t last long. The second Matteo’s lips touched hers she was flashing back into the past through the days of their marriage, the nights of their passion, the need that had always defined them. She was losing a battle to the only truth she could rely on—sensual need.
‘Would you have raised him with another man?’ He asked the question straight into her mouth so that she heard the words in the depths of her soul and felt his pain as though he’d touched her there. But he didn’t break their kiss, making it difficult for Skye to answer.
‘This is my child.’ The statement was filled with judgement. ‘And you are my wife.’
Skye made another sound, a mix between a groan and a sob, a sound of desperate emotion and pain, of acknowledgement and regret.
‘I won’t let you go. Not now.’

Poor Skye... or might it just be that she gets *everything* she's ever wanted in life? BOUND BY THE BILLIONAIRE'S VOWS is out at the end of July but to win a signed paperback copy (international post is fine), tell me your favourite place in Italy! Have you ever been to Venice? If not, where would you want to go? For my part - it's Florence. I could lose myself in that city, and the countryside surrounding it. I ache to go back - it's my "in another life, I'd live here" city. How 'bout you?

Come back next Sunday, when the winner of today's giveaway  will be announced and a smooch will be posted!
Posted by Clare Connelly