It's Independence Day for our American friends, and I have to admit, this is an American holiday I'm partial to. I know it has no personal relevance to me, but American culture is so pervasive (from the books we read, the songs we listen to, the TV shows and films we watch), that somehow we've ended up paying homage to Independence Day year after year. Also, I like to celebrate (any excuse) and I love to cook (seriously, American food, drool!). A few years ago, I found a recipe for southern fried chicken (thighs, marinated in buttermilk for 24 hours coated in flour and spices, deep fried until cooked and crisp - so good!) and I've made it every year since, served with slaw and American beer.

So, in honour of July 4th, here's a list of my favourite America-culture movie/TV shows (and I'll pop the recipe for the best fried chicken around at the bottom, too).

From country hoe-downs to New York city, Tiffany & co, Civil war recreations -- this movie is full to the brim with American culture references and is just so damned fun to watch!

All the feels for this classic American flight-school movie. You can be my wingman anytime...

I just love this American-president-in-peril trope and the scope for high-octane drama, especially when the best American movies like this seem to have heroes that fight like they were born as GI Joe.

Sex and the City is often described as a love note to New York city and if that's true, it's one of the most passionate ever written. Fall in love with this cult TV classic.

This movie never fails to get my heart racing (and is what we'll be watching later tonight). It has tears, humour, drama and action -- and the all important Happily Ever After (with fireworks and all!).

Surely the best of all the very American sports movies, this is sooo much fun and is must-watch if you've never seen it.

A stand alone film, prior knowledge of the Trekiverse is an advantage but not essential. A time-slip with an earth you'll recognise and one you won't, lots of action and patriotism wrapped in an awesome special effects bonanza!

Surely the best of the American political dramas, this is one I watch on repeat. For a show that was written and filmed decades ago, I can't believe how current the content and issues remain. Great dialogue, incredibly loveable characters, and writing that will have you laughing and crying each episode, this is one you can't miss. (Sidenote, a lot of the cast has ended up over on The Good Fight - definitely a little breadcrumb for diehard fans).

Now for my favourite fried chicken recipe... Happy cooking! So, what's your favourite ever special-occasion/festive recipe? That you wait for all year round (and maybe not even - Christmas pudding in May, anyone else?)... 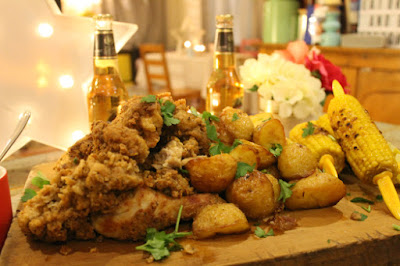