Firstly, last week's smooch winner is Therese Ferguson and you can contact Amy at amy@amyandrews.com.au

Thanks again for having me back as a guest this time. It's lovely to be back to share with you my latest release out this month- Wedding Night With Her Enemy. 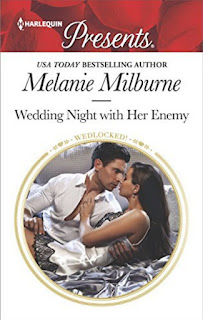 This is book one of a Greek billionaire's duet and features two career driven people who have always locked horns in the past. Allegra Kallas must marry Draco Papandreou or see her father and his young wife and baby son lose everything. But Draco's offer of a bailout has conditions. He wants to marry the feisty young career driven woman who claims not to feel anything for him but loathing. He will prove how much she desires him by marrying her and seducing her into his bed! But Allegra didn't forge out her legal career without guts and gritted teeth determination. She will do her level best to resist the ruthless Greek but it would certainly help if he wasn't so darn irresistible!

Here is a little glimpse of the battle of wills between these two...

Draco came back to where she was standing but she had moved back against the wall, which gave her nowhere to escape. And with her hands crossed over her body she didn't have room to unwind them to push him away. She breathed in the scent of him-lime and cedar with a hint of something that was unique to him. It unfurled around her nostrils, making them flare to take more of him in. She felt drunk on him. Dazzled by the pheromones that swirled and heated and mated with hers.
He slipped a hand to the side of her head, his fingers splaying through her hair until every root on her scalp shivered in delight. His eyes had that dark, twinkling spark of amusement that did so much damage to her resolve. Lethal damage. Irreparable damage. 'And how long do you think an on-paper marriage between us will last, hmm?' His voice was a deep burr that grazed the length of her spine like a caress from one of his work-callused hands. 'I want you and I intend to have you.'
Allegra couldn't stop staring at his mouth-the way his lips shaped around every word; the way his stubble made her way to press her mouth to his skin to feel the sexy rasp of his regrowth. Kiss me. Kiss me. Kiss me. The chant was a pounding echo in her blood. She didn't want to be the one to make the first move. Not like she had done all those years ago, when she'd thrown herself at him only to be brutally rejected. She wasn't that girl anymore. Making the first move would give him too much power. She could resist him. She could. She could. She could.
As if he could read her mind, he brought a fingertip to her mouth a traced a slow outline of her lips, setting off a round of miniature fireworks under her skin. 'Such a beautiful mouth. But I'm not sure if you're going to kiss me back or bite me.'
She inched up her chin. 'Try it and see.'
His smile was lazy and lopsided and sent her belly into free fall. But then he tapped her lower lip with his index finger and stepped back. 'Maybe some other time.'

And since you've been so patient in waiting for their first kiss, here is a little sneak peek...

Allegra moved like a sinuous cat against the hard frame of his body, her arms winding around Draco's neck, her fingers tugging, stretching and releasing his black curls. His erection was hot and heavy against her belly, the pounding of his blood echoing the deep, urgent thrumming of her own. She could feel her own moisture gathering, her body preparing for the pleasure it craved. Never had she felt desire like it. It was a raging fever, a torrent of need that refused to be ignored. Allegra wasn't going to sleep with him, but one kiss would be enough to take the edge off it, surely? What harm could one kiss do?
'You want me so bad,' she said.
His body pressed harder against her as if he hadn't the strength of will to do otherwise. His hands tightened their grip on her hips, his fingers digging into her flesh as if he never wanted to release her. 'Yes. I want you.'
Draco didn't say it out loud, but she could hear the word 'but' somewhere in that statement. Allegra brought her hand around to trace the outline of his mouth, her stomach pitching when the soft pad of her fingertip caught on his stubble. 'I bet you've kissed a lot of women in your time.'
'A few.'
She sent her fingertip down the shallow stubble-covered dip between his lower lip and child. Her eyes came back to his intensely dark gaze. 'Did you know you were my first kiss?'
'Not until you kissed me.'
Did he have to remind her how inexpert she had been?
'I've learnt since then. Don't you want to see how much I've improved?'
Allegra sensed he was wavering. He kept silent but his body spoke for him, his desire for her pulsing invisibly in the air like sound waves. His breath mingled with hers. His body was hot and urgent against hers, increasing her hunger for skin-on-skin contact. She slipped her arms back around his neck and rose on tiptoe, bringing her mouth to his in a soft touchdown. When she lifted off, his lips clung to hers like a rough surface does to satin. Allegra touched down again, moving her lips against the warm, firm heart of his in an experimental fashion, discovering their texture. Their shape. Their danger.

If you want to read how Draco takes over that kiss then leave a comment below and you might be the lucky winner to receive a signed copy ( open to  all regions). Just answer the following question: What is one thing you have zero will power over?