Can you please contact Michelle via michelle (a) michelle-douglas (dot) com to receive your prize!


And now for today's Sunday Smooch from The Wedding Bargain (book 6 in the Master Vintners series) which is being released through Harlequin Desire on 1 March 2015. 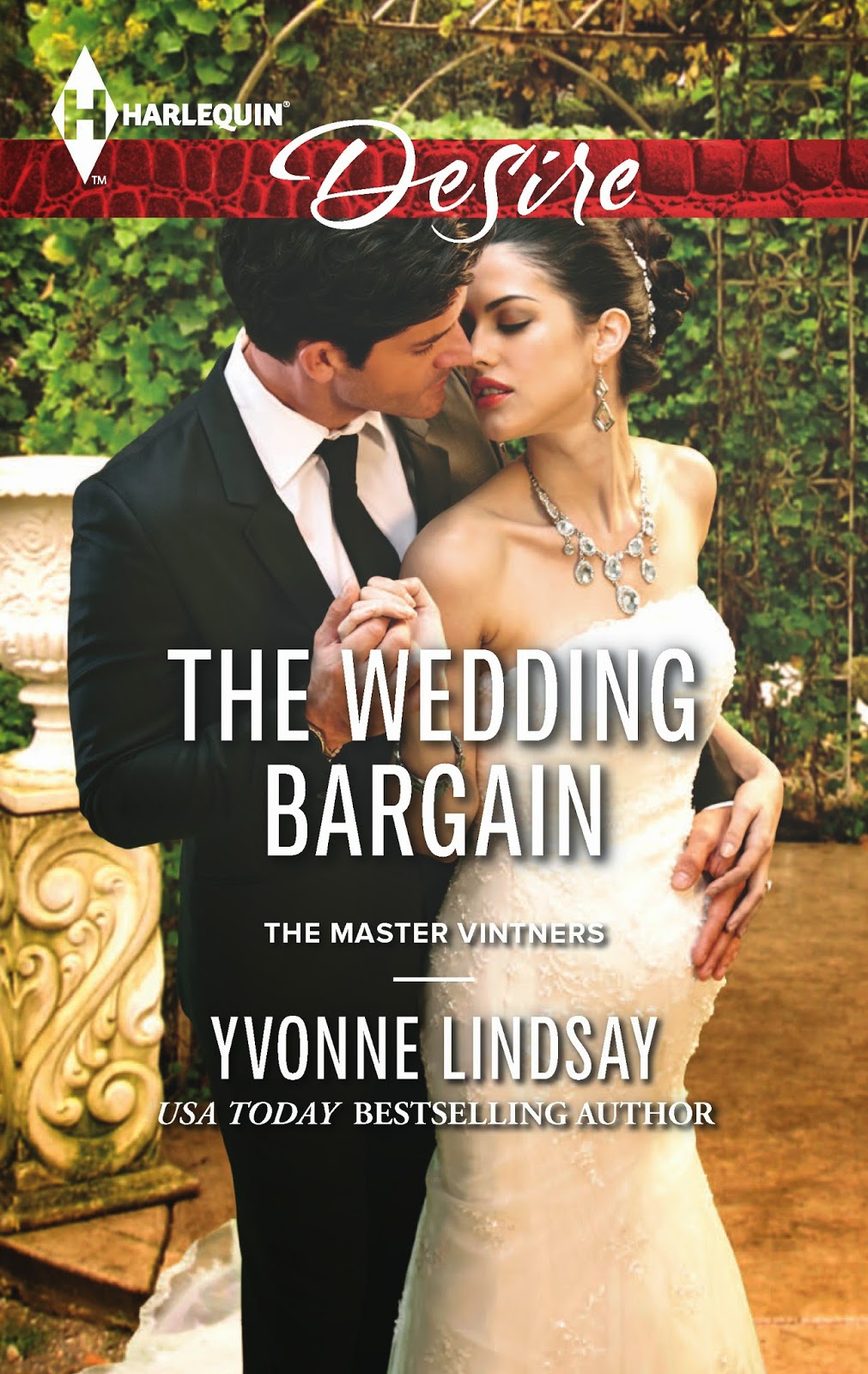 [Scene set-up: After rescuing her from her wedding, Raif has taken Shanal on a river boat up the Murray River to give her time to come to terms with her decision to run away from her fiance. Raif's fought a crush on this 'older woman' ever since he was in his mid teens and he's trying to do the right thing by her now--it's what his absent cousin would expect. But a playful challenge over who is going to make lunch becomes a whole lot more serious when it seems Shanal has been fighting her own attraction to Raif and--after all these years--she's ready to act on it.]


Shanal had one foot on the gangplank to the boat, then another, and was about to turn and relish her success when a pair of strong arms wrapped around her and lifted her clean off her feet. She squealed again, this time in surprise, as Raif spun her a full 180 degrees.
“I win!” he crowed as he set foot on the deck and slowly lowered her down, laughing in the face of her frustration.
“And you say I cheated?” Shanal said through gasps of air, turning to him in disgust.
“Hey, you forget. I’ve seen how you can run,” he teased, obviously alluding to her bolt from the church yesterday. “I had to use every advantage I had. Besides, I like to win.”
“That’s not fair,” she protested. Was it only a day ago? It felt like forever. Or did she just wish it was?
“All’s fair in love and war.” He smiled back cheekily.
“You may live to regret that statement,” she warned. “Remember, I can’t cook.”
Raif shrugged. “I also like to live dangerously, don’t you?”
She looked at him and felt a tug that pulled from her core. It had nothing to do with her labored breathing and everything to do with the fact that he still had her in the circle of his arms. Her heart was already pumping hard, her senses heightened, and all she could think of was how snugly she fit against him, how close his lips were to hers. How, if she just flexed her hips a little, she’d be nestled in the cradle of his pelvis.
But did she dare?
She did.
Shanal lifted her hands to his head and tugged it down toward her. “I haven’t had much cause to live dangerously so far, but I’m willing to give it a try.”
And then she kissed him.
She felt the shock roll through his body as her lips touched his. He was unresponsive for a second, then two. She began to wonder if she’d been foolish to do this, to act on the impulse that had overridden her usually careful and considered way of approaching things.
But then his lips began to move over hers, and his arms tightened, pulling her even closer against his body, against his solid strength. Her fingers furrowed through his short dark hair, holding him in place. Not wanting to let him go for a second, because if she did, she’d have to face the questions that would no doubt be in his eyes. Questions she didn’t know the answer to herself.
All she knew was that she suddenly realized just how deeply she longed for this. For this man, for his kiss. She slid her tongue softly along his lower lip, felt the shudder that racked his body, felt him harden against her.
This was how it was meant to be between a man and a woman. Need, desire, want. Not a cold clinical agreement. Not the feeling of being a possession, to be shaped and molded to someone else’s taste. Just the need to possess and be possessed in return. She moaned as Raif’s tongue touched hers, as a flame of heat speared through her body. She pressed against him, aching for him to fill that emptiness that echoed inside her. Desperate for him to ease the pounding demand that throbbed through her veins.
His hands slid under the sweater she was wearing, his sweater, and the heat of his touch burned through the thin T-shirt that acted as a barrier between his skin and hers. She wanted more. She wanted Raif. Her fingers clenched in his hair and she kissed him more fiercely, her tongue now dueling with his. Advance, retreat, advance again. The taste of him was intoxicating, another sensation to fill her mind and overwhelm her senses.
She felt her nipples tighten into aching buds, and she pressed against him, the movement sending tiny shafts of pleasure to rocket through her body. She’d never felt anything quite like this before. This level of total abandonment, this depth of need.
The sound of the ferry horn echoed across the water—a stark and sudden reminder of where they were, of what they were doing. Shanal let her hands drop to Raif’s shoulders as she pulled back. Her entire body thrummed with energy and anticipation, but as she came back to awareness of her surroundings once more, the strength leached from her body, leaving her feeling empty, limp.
“I—” she started.
Raif pressed a short and all too sweet kiss to her lips. “Don’t say a word. It’s okay. To the winner, the spoils, right?”

Do you remember your first kiss with your significant other? Or do you have a favourite memory from a wedding (either yours or someone else's?) Share it with us here on the blog and one comment will be drawn as a winner of a signed copy of THE WEDDING BARGAIN.

Come back next Sunday, when the winner of today's giveaway will be announced and a smooch from the lovely Sue Mackay will be posted!