Today we have a smooch from Nikki Logan's debut Romantic Suspense novel, Wild Encounter, but first ...

the winner of last week's Sunday Smooch Giveaway is -- M.Mundy!


Congratulations, M (ooh, that sounds so mysterious)! Can you please contact anna (at)and she'll send you a copy of Seven Nights in a Rogue's Bed. 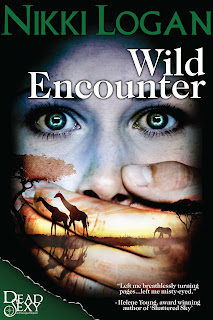 A wildlife release mission in Africa turns deadly when the convoy is hijacked by smugglers, and veterinarian Clare Delaney is taken hostage. Terrified for her life and her animals, the intrepid Clare establishes a rapport with the man she believes is the criminals’ leader, and reluctantly finds herself under his protection...and falling hard for the enigmatic man.

Alpha-to-the-max Simon deVries sees right through his sexy captive’s attempt to seduce her way to freedom. So when their simmering attraction flares into true passion, it takes them both by surprise. Now he’s torn between completing his secret mission and letting her escape without telling her his true identity. He knows if he lets her go, he will be risking his career, his life...and his heart.

What's just happened?
Clare Delaney is fighting for her life in a remote farmhouse in Zambia having been hijacked along with a load of wild dogs she was transporting to safe habitat in the north of the country. She’s bonded with the man she knows as ‘Alpha’ (for his dominant position within the criminal pack) and decided that he’s her best chance for escape, if only she can engender some compassion in him.

It has to be harder to kill someone you’ve had a conversation with, right?  But she goes too far and forces him into the role of protector and so he gives her a very graphic demonstration in why that’s not a good idea with the kind of filth he's working with…


Clare took her chance, clutching the front of his shirt. “Let me go, then. I can’t be used against you if I’m not here. I have no clue what it is you’re all doing and no clue where we are. Drive me out and dump me near—”


“I can’t. That jeopardizes everything.” His words were half-snarl but she got the sense that it wasn’t all at her. He may have seen straight through her poor attempt at seduction but she could see through him a little bit too. A decent heart beat beneath her trembling fingers.


“Then I’m going to stick with you,” she grasped. “At this point, you are my best chance of survival, which is all I’m interested in. My survival and the dogs’ survival. I’ll do whatever it takes to secure that.”


“Whatever it takes?” He shuffled closer, his voice dangerously low. “Really?”


She lifted her chin and fired off her steeliest glare. He looked unimpressed. He tipped his head down closer to hers.


“Just so I’m clear…” His whisper tickled her neck hairs to attention. “Regardless of what I do, you’re going to create the illusion you’re my property in the hope I’ll protect you? Me, one of the men who kidnapped you?”


Clare swallowed a sudden rush of uncertainty. “If necessary.”


He stood less than an inch away from her, his chest heaving, mouth close to touching hers. Her tipped-back head swum with his proximity and she struggled in vain against the current of his surging energy.


“If I’m damned no matter what I do, why would I hesitate to take what you’re so kindly offering?” he asked, one eyebrow raised.


Her mouth turned to ash as she finally saw the danger she had created for herself.


“Congratulations,” he pressed her small body to the wall with his big one, his lips dangerously near. “You’ve just created a scenario in which I have absolutely no motivation to treat you well. Was that what you had in mind with this plan of yours? How far would you have gone to play it out?”


Her knees deserted along with her courage and her skin roared fierce heat. But his body pressing hers into the wall kept her upright. She shook her head, dislodging a nervous tear that ran down to where their mouths nearly met. He closed the gap, tasted the tiny droplet where it slid to a halt on her upper lip, and lingered there a moment.


It was a half-kiss designed to send a message. Angry and mean and intended to scare her. But it excited her just a tiny bit.


One hand came up to cup her face and his low words against her parted lips were private and oddly gentle. “I know you’re frightened. I know you’re desperate and, for some reason, you are more worried about the survival of those bloody dogs than you are of your own.” He moved his mouth round close to her ear. “But know this, Clare. I am by far the most decent man in this house, and given how badly I want to lock this door, rip my t-shirt off you and not come out for a week—”


She stifled a sob.


“—that should give you an indication of the sorts of dangerous things every other man in this house is capable of if you open the door to them that you just did for me. Have I made myself clear?”


A single word struggled past the fist in her throat and she ground it out between clenched teeth. “Crystal.”


“If it’s survival you want, then you need to fight and kick and scream at every one of us, and that includes me.” He pushed away from her and took a moment to collect the chair. “In fact, right now, I would say most especially me.”


He walked from the room, slamming and locking the door behind him. 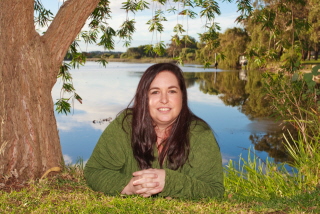 To be in the draw to win a digital copy of Wild Encounter, tell us about the ‘baddest’ kiss you’ve ever had -- not the worst...the best…with a badboy.

Come back next Sunday, when the winner of today's giveaway will be announced -- and we'll post a smooch from Dating and Other Dangers by Natalie Anderson!
Posted by Nikki Logan