Today we have a smooch from Annie West's new release THE GREEK'S FORBIDDEN INNOCENT but first ... the winner of last week's Sunday Smooch Giveaway is

Can you please contact Welcome to another LoveCats DownUnder Sunday Smooch!


Today we have a smooch from but first ... the winner of last week's Sunday Smooch Giveaway is Ginette K. Can you please contact amy@amyandrews.com.au to receive your copy of The D.I.L.F.

And now for today's Sunday Smooch from Annie West. 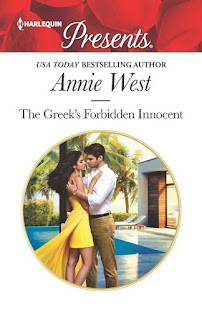 The Greek’s virgin bride…
…is hiding her royal identity!


While helping her friend escape an arranged marriage dutiful Princess Mina finds herself captive on enigmatic Alexei Katsaros’s luxurious private island! Mina must convince Alexei that she’s his future bride—but she doesn’t expect their scorching chemistry to be so deliciously overwhelming… And after a night in the Greek’s bed suddenly there’s more at stake than just Mina’s hidden identity—her heart’s at Alexei’s mercy too!

Scene set-up
This is a masquerade story with a hint of the Marriage of Convenience trope. Mina steps in to save her best friend Carissa when Carissa's manipulative father offers her in a convenient marriage to tycoon Alexei Katsaros. Determined to give her friend time to elope with the man she loves, Mina goes to Alexei's island, pretending to be Carissa. To her surprise, she finds herself drawn to Alexei - far too much. It seems the feeling is mutual and Mina decides it's time to leave. When she tells him there will be no marriage, for the first time Alexei lets his formidable control slip...

‘Not so fast, princess.’
Alexei took in her startled expression, and the quick, convulsive swallow, the darted look at his hand on her arm – her warm, bare, silk-fleshed arm.
For two days he’d been careful not to touch her. Not even to brush against her, for his awareness of Carissa verged on the primal and he preferred to keep a cool head where the Carters were concerned. Especially as her father still proved elusive, despite the efforts of a top investigator to locate him.
Alexei breathed deep, scenting her, that tantalising aroma of exotic spice that made him want more. Far more than a single touch.
More than a provocative game of advance and retreat.
More than this brush off.
The marriage arrangement was a sham, yet Carissa’s dismissal rankled. Did she really believe she could simply turn her back on him?
‘You want chemistry?’ His voice hit a bass note and he felt her shiver. Her eyes widened and he caught a hint of vulnerability in that sherry brown gaze. But then she lowered those long lashes, veiling her eyes before turning her head to survey his restraining hand. Her pointed stare and haughty expression were a silent demand that he release her.
Why silent? Because she didn’t trust her voice? Alexei watched Carissa’s pulse thrum at the base of her throat.
How could she say there was no chemistry when the air was charged with animal attraction?
He stepped close and still she didn’t look up. Alexei frowned. She wasn’t scared, was she? The bizarre thought hit out of nowhere, tangling his thoughts. It was contrary to everything he knew of her.
Carissa was proud, opinionated, and brave, considering how most people bowed to his wishes. It wasn’t as if she were inexperienced. Carter had mentioned a failed affair with a Frenchman.
No, it wasn’t fear holding her still. He read the shallow rise and fall of her breasts, the rushing pulse.
‘I can give you chemistry,’ Alexei murmured. He put his hand beneath her chin and lifted it till she had no choice but to look at him. Her mouth was a mutinous line but her eyes... Her eyes glowed dark gold. Desire slammed into him.
She lifted a hand to his chest, pushing as she opened her lips, no doubt to protest. So Alexei stopped her with his mouth, muffling her words, drawing in her warm breath.
For a moment there was stillness as shock tore through him. Just this simple touch and he felt poised on the brink.
Then Alexei gave himself up to instinct and delved deep, cradling her head with one hand, shuffling his legs wider as he lashed his arm around her and fitted her in against him.
He’d known this would be good. How right he’d been.
She tasted like every desire made flesh, rich and tantalising. Different to any other woman yet somehow familiar. Alexei pressed harder, simultaneously demanding and coaxing a response till finally her tongue slipped against his, tentatively at first, almost shy.
This was unlike anything he could remember. A judder of pure need ripped through him. His hands tightened as she caressed him again, slowly, learning the taste and shape of his mouth. As if he were some new treat to be savoured.
That slow, cautious exploration was more arousing than anything he’d experienced in years. It was all he could do to stand there, letting her take her time, when every lick threatened to blow the back off his head. He shuddered and his groin tightened as if she’d reached out and taken his burgeoning erection in her hand rather than simply returned his kiss.


Alexei’s breath expelled in a huff of satisfaction as her responses grew more voluptuous. Leaning in, he demanded more.

Mina's attempt to deflect Alexei by telling him they can't marry because they have no chemistry backfires badly. Or well, depending on your point of view!

Have you ever done something and found the result was the opposite of what you expected?

Leave a response here and go in the draw to win a signed copy of THE GREEK'S FORBIDDEN INNOCENT.