But first let me announce last week's Smooch winner-  Therese Ferguson, if you could contact Annie West at annie@annie-west.com she will get the book to you.

Thanks for asking me to do another Sunday Smooch. A Ring For The Greek's Baby is the second book of a Presents/Modern duet - Wedding Night With Her Enemy was featured last month.
This novel is a one night with consequences story and I really enjoyed writing Emily's character in particular. She sprang up in Wedding Night With Her Enemy as my heroine's legal secretary and demanded her own story! Well, not really demanded as she's not that sort of person. She's warm and loving and incredibly clumsy.
Loukas Kyprianos is a locked down loner who never stays in a relationship longer than a night or two, but something about his one-night stand with sweet and shy Emily makes him go back to offer her an affair, only to find out ( by accident because Emily was trying to work up the courage to tell him) that he's to be a father- the last thing he ever planned to be because of his sad and tragic past. 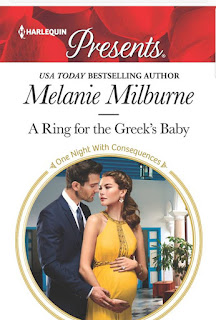 Here is their smooch after Loukas brings her back from hospital after she hurt her hand in the comedy of errors when he finally finds out about the consequences of their one night of passion...

Emily slowly lifted her head out of the handkerchief and focussed her gaze on his dark inscrutable one. She bit her lower lip. 'Hormones. Sorry.'
A ghost of a smile flickered at one side of his mouth and his hand moved to cradle her cheek, his thumb stroking back and forth in a barely moving movement that set her facial nerves dancing. His became hooded and he slipped his gaze to her mouth, lingering there for an infinitesimal moment. Emily sent the tip of her tongue out over her lips in a darting movement, unable to stop the impulse even though she knew it was a primary signal of arousal.
The air tightened. Crackling with possibilities. Erotic possibilities that made her blood tick and her heart trip.
His thumb moved to her bottom lip, stroking it like someone smoothing out a tiny crease in silk. It was as if every nerved in her lip rose to the surface, swelling, pulsing, heating against the pad of his thumb.'You have the most beautiful mouth.' Loukas's voice was so deep it sounded as though it had come from beneath the floor.
Emily touched his face with her uninjured hand, losing herself in the depths of his deep-brown gaze with its fringe of inky lashes. His eyes were so dark she couldn't tell where his pupils began and ended. 'What are we doing, Loukas?' Her voice was not much more than a whisper.
His warm breath wafted over her lips. 'This is what we're doing.' And his mouth came down on hers.
His lips moved with sensual expertise over her mouth, rediscovering its contours, drawing from her a response that made her blood sing in her veins.
Emily's hand crept up his chest and then linked around his neck, her body pressing closer to the warm, hard heat of his. His tongue stroked over the seam of her mouth and she opened to him on a sigh of pleasure. The glide of his tongue was just as intoxicating as the first time he'd kissed her. It sent every female hormone in her body into paroxysms of excitement. His tongue found hers and cajoled it into play, teasing it, stroking it, chasing it. Seducing it. Loukas's hands settled on her hips, holding her close to his body, where his blood pumped and his flesh surged. She moved against him instinctively, driven by primal urges she had no control over. He angled his head to depend the kiss, one of his hands coming up from her waist to cup the side of her face, his fingers splaying through her hair.
He nudged against her lips and then nibbled the lower one until she was whimpering against his mouth. She sent her hands through the thick silk of his hair, tugging and releasing the slight curls, delighting in the way he made deep, guttural sounds of approval....

I hope you enjoy Emily and Loukas's pathway to Happy Ever After. I have a signed copy of both books for a reader who leaves a comment to the following conversation starter: Is there something you have done in the past that had consequences you didn't expect?