We thought we'd share some stand out book love today!

Asking an avid reader what is their favourite book is liking asking a parent which is their favourite child...too hard!!! But some of the lovecats have managed to narrow down their faves of the year so far.  Here's hoping you'll get some great suggestions to add to your TBR shelf/pile, and maybe try some new authors.

I can’t pick a favourite read for the year so instead am choosing the one that stood out as being so completely different from anything else I’ve been reading (and thank you to the fellow authors and readers who suggested it). ‘Rivers of London’ by Ben Aaronovitch is a cross between ‘The Bill’ and ‘Harry Potter’ with a lot of lovely wit and humour thrown in. The plot is fantastic (in both senses) so if you don’t like a touch of make believe, don’t pick it up. I found myself swept away by the story, the characters and the tension and have now enjoyed the later books in this series too.

I'm a huge fan of Kristin Hannah. She just keeps getting better and better.

This is a story a girl and the family who befriended her, and the tragedy that came from that. Told through two people's POV it is unputdownable.

My stand out find this year has been Eve Dangerfield – a Melbourne author.

My favorite book so far this year is Neighbor Dearest by Penelope Ward. Love it! Fast and sexy and the hero was divine. Great chemistry between the two lead characters.

My favourite recent read is The Hating Game by Sally Thorne (single title contemporary romance, first book, Australian author, although the book is set in an anonymous American city.)  It’s first person with only the heroine's viewpoint, and not knowing what was going on in the hero’s head worked beautifully for this story.  Lucy and Joshua are competitive co-workers at a publishing house; their relationship is antagonistic (understatement!); their banter is a thing of beauty.  I loved the writing, the fresh take on office romance, the love-hate dynamic, and the conflict resolution.

One of my favourite reads this year is Career of Evil by Robert Galbraith (aka J.K. Rowling)  It’s a crime story not a romance. But author has created two quirky, memorable characters in private investigator Cormoran Strike and his sidekick Robin Ellacott. Over the three books (so far) in the series, a romance of the type when the reader really wants for them to get together is building. I initially resisted these books (book one, The Cuckoo’s Calling and book two The Silkworm) because of the hype about the author’s attempt at anonymity. But once tried, like the Harry Potter books, they immediately became addictive. 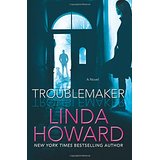 My standout book so far this year has been Linda Howard’s, Troublemaker. Linda Howard has been an autobuy author of mine for many years and her heroes are just so larger than life and so intensely perfect for her heroines that her books are an absolute pleasure to read. It’s rare for me to be able to suspend my inner author voice when I’m reading a book, y’know, the one that is sometimes prompted to think, “Hmm, I wouldn’t have written that line that way,” but with this book I could simply be a reader and enjoy someone else’s hard work for a change.


What have been your standout reads so far this year?