Today we have a smooch from  Louisa George but first
... the winner of last week's Sunday Smooch Giveaway is
Lynlinwill Williams!
Can you please contact  yvonne (at) yvonnelindsey (dot) com  to receive your copy of LONE STAR HOLIDAY PROPOSAL.
And now for today's Sunday Smooch from Louisa George! (Available for pre-order from Amazon) 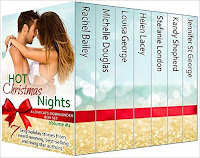 BABY IT'S HOT OUTSIDE

When rugged cop Daniel Wade agrees to help organize his friend's Christmas wedding it brings him face-to-face with the bridesmaid, his estranged wife. Emma is determined that divorce is on the cards, but sometimes all it takes is another chance to get things right..

Kiss scene: Set up: After a very frosty start to their awkward reunion Daniel and Emma are leading a pre-wedding kayak trip for the wedding guests. An argument has led to Emma pushing Daniel into the sea...

Emma quickly steered into a deserted sheltered bay, jumped out of the kayak and dragged it up the shore, over tiny pebbles and shells that stung her feet. Then she took shelter in the far corner of the bay underneath an ancient gnarled pohutukawa tree -their tree- and stood on a carpet of tiny fallen crimson stamens. Shivering. Panicking.
But it was a delicious panic bubbling in her stomach, something she hadn't felt in a long time. She hadn't expected that. Or simple fun, straight after an argument. Just like the good old days; forgiving and forgetting; erasing the bad times with a laugh. And a kiss.
Danny wasn't far behind, ripping up the waves, then standing shoulder deep, striding out of the sea like Poseidon, with a smile on his lips, a curse in his mouth. He had menace in his eyes.
And sex was glittering there too.
The air around her seemed to electrify at the thought. For them the sex had never been the problem. It was everything else.
"Danny! Finally! Guess you worked it out, then?" Breathless. Bracing herself for his words. Shaking as the water dried on her skin leaving her cold on the outside. Inside, she was burning a fever.  "Good to see all that training put to some use."
But he said nothing, only fixed her in his sights and strode towards her. Each step making her heart thunder in her chest. As he closed in he unzipped his lifejacket, flung it to the sand leaving his chest bare, his exquisite body rock hard and slick with water. His shorts sticking to his thighs, outlining the strength of his legs. And more.
She remembered the countless times they'd paddled here at dusk and made love by the light of a campfire. How she'd clung to him and believed that what they had could never be broken, that it would last forever. She remembered the way they'd laugh at something, at everything, that goofing around had been their default. That serious was something they'd tried to hold back because being a doctor and a cop had enough serious without putting it between them.
She remembered that they would kiss away each other's fears. That she couldn't imagine being anywhere else other than in his arms, held tight and safe and warm. A lifeline from the thrashing sea of life.
And she wondered how that anchor had slipped so far away from their grasp and whether it was still there, bobbing just out of reach. Maybe some effort. A stretch. A leap of faith?
When he reached her he was breathing hard and fast, his arm muscles pumped, water dripping from his eyelashes like diamonds. He stopped in front of her. Close. Close enough to touch. Which he did, reaching out a hand to her cheek. His thumb made slow strokes over her skin, stoking an unbearable heat in her gut.
His gaze locked on to hers as he wiped the droplets from her face, ran a trail to her lip with his fingertips. In his dark mocha eyes a fire burnt, hot and hungry. And she didn't know whether to run or stay.
When she bit down on his thumb pad he leaned in and groaned in her ear, "Do that again and you'll be in big trouble, lady."
"Promise or threat?" Another game they'd played so many, many times.
But she didn't have time to find out his answer because his mouth slammed over hers, all promise, all threat. The taste of salt and elemental man swamped her. She wanted him. Had never stopped wanting him. Would never, ever stop wanting him.
She wound her hands around his neck, angling her mouth against his, pulling him tight against her. His skin was cold as she moved her fingers over his shoulders, down his back- his muscles tightening in response. Slowly, she relearnt the feel of him, the taste. The empty, frigid two year gap bridged by sensation and searing heat, by need and touch.
His hands cupped her cheeks, fingers spiking her hair, innocent almost. A new beginning, belied by his erection pressing hard against her. But when he groaned her name there was nothing innocent about the raw need winding through her, blurring her edges. Her breath stuttered, the ache in her core flared to life. So good to know how much she could still turn him on.
"God, I've missed you," she managed between kisses, surprised at how much she meant it. But she had missed him. Missed this. Missed this Danny. She knew the other paddlers would be here soon and she didn't rightly care. Couldn't think about anything other than melting into him again. She pulled him to the ground, out of view from the shore, her hand sweeping across his sculpted chest. Beneath her fingers was the steady heartbeat of a man she'd known soul deep. A man she'd loved with every fibre of her being.
Her body was on fire anticipating his touch, heat swirled in her tummy, lower. Her nipples peaked as he crushed her ever tighter, deepening the kiss. His heat and his scent familiar, yet new. Powerful and strong, yielding and giving. And she responded the only way she knew how- by giving herself back to him.
Baby, It's Hot Outside is one of the novellas from the Love Cats Boxset, Hot Christmas Nights available from 1st December or on pre-order NOW from Amazon

Come back next Sunday, when the winner of today's giveaway will be announced - and more smooches from the boxset will be posted!

Louisa is giving away an e-book copy of her book to one lucky commenter!  So her question to you is:

Who would you like to be stranded on a desert island with, and why?