I come from a large Welsh family. I'm the youngest of seven siblings and in such a big brood it's very hard to keep a secret. You tell one person, they whisper it to someone else, of course begging secrecy - heads nod, then calls are made and secrets are told in quiet voices. Wives tell husbands, sisters tell brothers, mothers tell daughters, you get the picture.

A few months back a rumour circulated. My eldest brother was up to something. There were whispers, but nothing confirmed. The main issue, is seemed, was to keep said secret from our eighty three year old mother who's job it is to worry about everything. Now, being the inquisitive sort that I am (I'm a writer, so inquisition is second nature) I asked around and pried the snippet of information from one of my brother-in-law's. My eldest brother (Let's call him EB) was, it seemed, taking flying lessons.

Right. Had EB ever intimated that he had a longing to fly? Maybe. Or had I missed that snippet of information over noisy family get-together's? I discovered that he's having a lesson every week and even considering getting his own areoplane. I wasn't exactly shocked because EB had been a competitive equestrian when he was younger and then there was the motorcycle faze a few years later. He had done interesting things in the past. This was just another interesting fact to add to the pages of of his life,
But it got me thinking about living out dreams. The biggest dream I had in my life was to get published, and now I'm fortunate to be living my dream as a full time author. But what about other dreams? For some it's the dream wedding, having children, owning a home, taking the trip to Tuscany, or grey nomading in the outback. What about the balloon ride, owning a Harley, deep sea fishing, whale watching. So, not only did EB's new venture get me thinking, it made me realize that it really is never too late to seek out adventure, start a hobby or try new things. I have an older sister who learnt to play the saxaphone, cello and double bass years after her kids had grown up and left home. She's also currently studying to be a barrister. 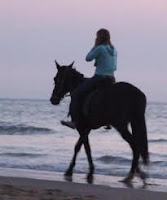 As a horse owner  it's amazing how many people say to me, "Oh, I'd love to ride a horse." And then I hear someone talk about how they did one of those bridge walks and I think, I wish I wasn't afraid of heights. So learning about EB's new adventure made me add a few things to my own bucket list. Nothing too daring - horse rides along the beach are about as adventurous as I get.

Although, if my sixty something brother can dream of wings, maybe the bridge walk isn't too far out of my reach.
Have you achieved a life long dream recently, or are you still adding things to your list of dreams?
Posted by Helen Lacey