Today we have a smooch from Millionaire Playboy, Maverick Heiress by Robyn Grady, but first ...

the winner of last week's Sunday Smooch Giveaway is --
Kaelee!

soyaranicholas (at) yahoo (dot) com and she'll send you a copy of A Kiss to Seal the Deal. 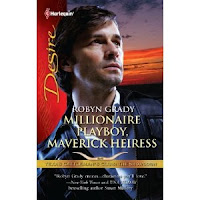 For successful New York architect Daniel Warren, designing the new Texas Cattleman's Club is an exciting challenge. And so is getting to know the delicious Elizabeth Milton. The fiery Texas heiress combines cosmopolitan chic with down-home sass—a mix impossible for a city slicker to resist.

But a carefree affair is all they can have. A stipulation in her family's will keeps Elizabeth honor-bound to stay in Royal. And this millionaire's business will soon force him to move on. Unless either dares to make the ultimate sacrifice and put love first.

[Set up: Daniel and Elizabeth are taking a stroll around her ranch in the moonlight. She's become defensive over Daniel's questions regarding the caveat in her parents' will that states she must stay in Royal, her Texas hometown, for ten months of the year when it's obvious she longs to be free. However, she is also hand-on-heart loyal to her heritage and her deceased parents' wishes.]

“Daniel. I want you to know, I’m happy staying here,” she told him as he turned around. “Sometimes it’s a little…inconvenient. But I’ve come to see this ranch is my future.”
“That’s fine.” Totally her business. He tipped his head. “Good night.”
He’d begun to turn away when she interrupted again.
“You don’t believe me.”
“It shouldn’t matter what I believe.”
“It’s only until I turn thirty.”
By thirty he’d been well on his way to being successful, and happy, in his own right. But, again, not his concern.
“You don’t have to convince me.”
“I don’t want you to leave feeling sorry for me,” she pointed out. “I have everything any person could want or need.”
“Just make sure you don’t include freedom on that list.”
She growled, “It’s not a restriction.”
“No?”
“No.”
As she stood before him, defiant in the moonlight, his skin heated, muscles clenched, and as his gaze held hers, a dark, deep urge overwhelmed him, a primitive impulse that set his heart pumping all the more. She didn’t want his pity and, God save him, he didn’t want to show her any. But she wanted him to believe she wasn’t interested in too much beyond this parcel of land?
Miss Milton was a liar.
Prepared to tell her just that, he moved forward. He stopped an arm’s length away, searched her questioning eyes but then, rather than speak, he acted, circling her waist and bringing her mercilessly close. At the same time he pressed her in and her mouth opened to protest, his head came down, lowering, determined, over hers.
While her hands bunched and pushed against his chest, he held her. When muffled, incensed noises vibrated from her throat, he didn’t relent. Damn it, if he was going, he wanted to leave them both with at least a taste of what he’d felt bubbling and fermenting between them. He needed to show this woman what she already knew.
There was more to life than two months a year.
And gradually, as he’d known she would, Elizabeth came around to his way of thinking. Her fists loosened against his shirt until her fingertips were clinging rather than pushing him away. Her body, instead of objecting, relaxed and, bit by bit, dissolved. Best of all, her lips grew supple and parted, no longer refusing but inviting him in. Daniel smiled to himself.
Damn, it was good to be right.


To be in the draw to win a copy, let me know if you've ever jumped in a saddle, I certainly have a story to tell!

Come back next Sunday, when the winner of today's giveaway will be announced -- and a smooch from Boomerang Bride by Fiona Lowe will be posted!