by Nikki Logan
So...I survived a 35 hour journey, a 2000+ delegate conference, a hotel that perpetually sways for those sensitive enough to feel it, a nasty virus, Times Square crowds, the mystery that is tipping, the infamous (but entirely unpresent) New York attitude and a sweltering Manhattan summer.


was nothing like I expected and so much more. Things I was prepared to be impressed by failed to and the smallest things blew me away.
I could write for hours on this subject but instead I wanted to give you my top six moments - keeping in mind I didn't leave  which of course is only 1/5th of and of which I only saw about 2%.
In reverse order…. (any images not credited are my own, thanks to Wiki Commons for most of the others)


Number 6: ﻿﻿﻿﻿﻿﻿
Visited the offices of Harlequin to catch up with Exec Editor Mary-Therese Hussy for a tour. The offices are in the much lauded Woolworth Building, a gorgeous old-school establishment that takes itself (and its position just two blocks from Ground Zero) so seriously that tourists are banned and even invited guests are prohibited from looking around or taking photographs.


For all it’s amazing grandeur, unfortunately the Woolworth building will remain in my mind forevermore as the only place in where I was treated rudely.  By its security. And I was there on invited business. Reeeaaally, hope Harlequin doesn’t pay too much for that privilege.


I didn’t take pics inside Harlequin’s offices either (cos that just felt wrong) but I did grab a snap as I waited for my lift back to the real world. Love the way the bright, friendly Harlequin colours welcome you in an otherwise austere building. 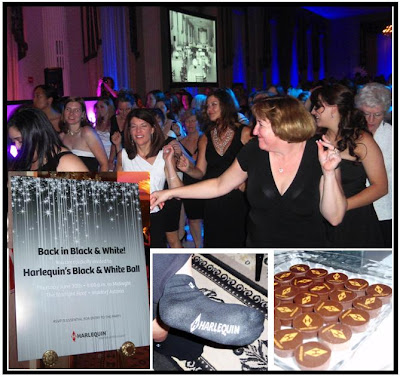 The Waldorf Astoria was having repairs to its façade when we arrived so here’s a pic of it thanks to WikiCommons (below) but once inside what a glamorous, fabulous hotel! Harlequin’s Black & White ball must have cost them a bomb because nothing was overlooked. From what appeared to be a specially shipped in white carpet, to the chocolate fountain desert stations, to the open bars with liquors I didn’t even know existed, to the red carpet photo arrival, to the free Harlequin ‘dancing’ socks, to the gorgeous Harlequin chocolates, and the rocking DJ.  Amazing attention to detail. Someone in the upper ranks of Harlequin really knows how to throw a party. 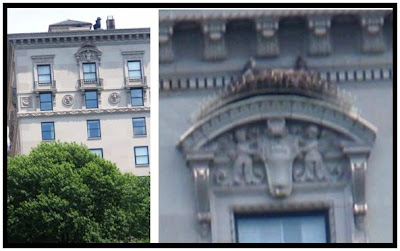 was busy and green and filled with great recreational and artistic things but it really wasn’t my favourite NY green space. It was flat and kind of predictable (I like some topography in my outdoor spaces), but I can totally see why NYers love it. It’s their hub. Their heart. All the good stuff is clustered around it.
My favourite part of CP was bumping into a bunch of birders who were watching the two just-fledged young of a Red-tailed Hawk called ‘Pale Male’ (famous in birding circles!) and his new woman ‘Ginger/Lima’ in their nest at 927 Fifth Ave.  My photo is super-poor of their nest, but the birdos had a high-powered telescope which afforded magnificent close-up views of the new babies who are getting ready to leave their nest.


Spent a good bit of time chatting to them and getting the history of the site and the family. The nest was demolished by the building’s owners a while back but there was a popular outcry and they had to reinstate it (including with some safety measures) to stem the negative PR.  Love people power.
Number 3: 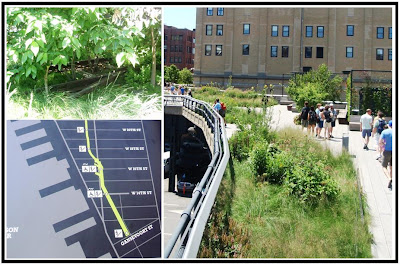 The HighLine was a metro rail line built about two storeys off the ground in the early 1930s to get the freight trucks off NY’s streets. It ceased functioning in the 1960s and has lain fallow and covered in self-sown weeds until 2002 when a group of residents got together with local govt to turn it into New Yorks biggest ‘rooftop garden’. It runs 20+ blocks and gets you high up off the bustle and crowds of the streets of ’s lower west side. A fantastic and interesting way to move through NY’s streets.  The HighLine is planted out with species reminiscent of the self-sown ones that took their chance when the HighLine trains first stopped running.  Such a fantastic example of what can be done with some thought, dedication and …ahem…funding. 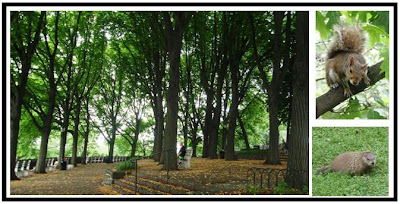 Fort Tryon/The Cloisters Topography! And stunning parklands! And a Medieval cloister. This day, all by itself, SAVED my experience. I’d been so let down until now by everything that wasn’t. But oh my goodness who knew that had something like this on it. I can only imagine how many other gems like it I missed by using the bog standard tourist books as my guide.
History. Nature. Stunning views and… best of all… cool.
We stepped out of the previously sauna-like subway into the cool, dark and quiet of the station which is cut hundreds of feet below the granite on which park was established.  Big, old-school elevators take you up though the rock to the entrance of the park which is quiet and rambling and beautifully positioned to offer so much more than just views of big buildings.  The northern tip of was truly extraordinary.

Until that moment I couldn’t find a single square inch on which I’d be prepared to live. But I found it there.

We lunched in a stunning restaurant called ‘New Leaf’ which looked out over the Hudson River and then made our way via ye old stone paved terraces, bridges, stairways (and via heaps of wildlife, finally!) to The Cloisters, a branch of the Metropolitan Museum of Art built by the Rockerfellas in 1938, representing an homage to the many different styles and eras of European monastaries and filled with artefacts pillaged from…erm…celebrating the 11th - 15th centuries. 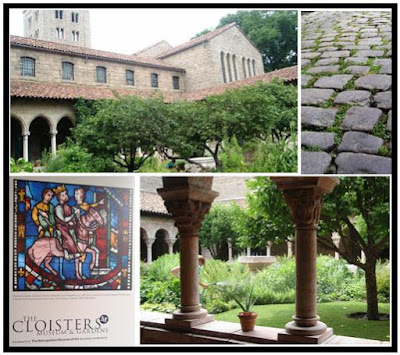 The biggest highlight… the Broadway production of “War Horse”.

I'm a theatre girl from way back so staying in the theatre district was pretty cool but, despite being just one elevator-ride away from the discounted TKTS office in , I paid full price for this show bc I’d heard such fabulous things about it.  A real ‘boys own’ adventure story with a heart-wringing animal theme (hundreds of thousands of regular farm horses were conscripted into WW1 and forced to become horses of war—a task for which they were physically and emotionally unprepared). I knew it would be harrowing but I hoped it would be a bit uplifting.
﻿﻿﻿﻿﻿﻿﻿﻿﻿﻿﻿﻿

I didn’t expect my tears to be from the beauty and poetry of the puppetry.


The plot in twenty seconds? Boy loves horse. Bastard father sells horse to war effort. 16yo boy enlists to go to and bring horse home, he succeeds: a shattered man and his shattered horse. Ugh. Tears almost before it began!


But OMG. The horses. There were actors inside (and outside) those horses but they become invisible almost immediately. The way they captured every nuance, every ear flick and tail swish and footstamp in a way that was so very real and true of every horse I’ve ever known. Those horses were REAL as far as my brain was concerned.


I had fourth row seat (in the middle) so this photo might have been mine (it isn’t). But all that smoke triggered my asthma so I watched the rest of it from right up in the gods...but I didn’t care. That just made it easier for me to leap to my feet and cheer when the actors had finished taking their bows and the two horsey leads galloped triumphantly onto stage. I’m tearing up now. It was that kind of moment. I’ve never seen 500 fur-wearing, toffy theatre-types leap to their feet and roar quite like it.


The kind of story that cuts straight to your heart.  Like all good romances really. :)

It well deserves its number one spot.
***
So what have I missed? Have you been to NYC? Do you live there? What are your favourite places? Not sure I’ll ever make it back but I’m already finding things that I wish I’d done.
Maybe I’ll have to return one day…
xx