2015 has been one crazy-ass year for me. It was crammed full of book releases and travel, an award or two and some work and family milestones. So, as we all look forward to what 2016 holds, I thought I'd look back at the year that was. 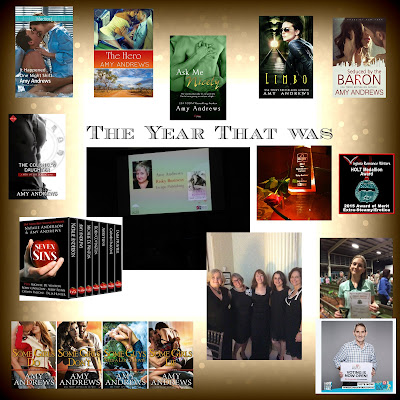 Release of two books. My only Harlequin medical and only print book for the year, It Happened One Night Shift and a Tule novella The Hero

I officially resigned (had been on leave for 7 months) from my job as a paediatric intensive care nurse after 21 years. A big, scary decision but one that felt like its time was due and I'm pleased to report that, so far, it seems to have been the right one. The big change I've noticed more than any other? I wake now between 6 and 7 most mornings. This is UNUSAL IN THE EXTREME for me. After being a shift worker for 27 years I thought being tired all the time was the norm. Now, I'm usually awake before my husband (although never out of bed!) who looks at me when he wakes and demands to know who the hell this "new" woman is!

My little brother became a TV star as one of the "sharks" - investors - on Channel 10's Shark Tank. He's now been nominated for a Logie.... None of us can really get our heads around it, including him :-)

Release of Ask Me Nicely. This is the sequel to my USA Today bestselling Brazen from Entangled Publishing - No More Mr Nice Guy - and I had been overwhelmed by the number of people who'd contacted me re Sal getting her story. So.....Sal got her story!

Release of Limbo, my weird, funny, quirky, woo-woo, disgraced PI meets ex-rock-chick-cum-cadaver-make-up-artist story that pretty much no-one read. Sob! Such a shame but that's the nature of the business. I suspect readers just thought it was too different. Regardless, I love it and loved writing it and sometimes, as an author, you just have to write the story that's calling you. I'll be writing the second book next year because Joy and Dash are too strong to ignore.

Release of Seduced by the Baron, the 4th in the Fairy Tales of New York series that I wrote with three other fab authors - Kelly Hunter, Lucy King, Heidi Rice - for Tule Publishing. We all had a great time basing each of our stories on a fairy tale - mine is Cinderella.

No More Mr Nice Guy was nominated for the HOLT Medallion and was an Award of Merit recipient.

I was very luck to travel to New York for the annual Romance Writers of America conference. It was my first time ever travelling overseas by myself but I managed just fine and was gone for only 8 days! Talk about a whirlwind! But again, due to having all my diurnal rythms back to normal by not working shift work anymore, it was the least jetlagged I've been in a long time! Oh and NYC was its divine self! The crowning glory was going to the Harlequin Black and White cocktail party for its authors at the Waldorf Astoria - its a real pinch-me night that one :-)

Release of The Colonel's Daughter which was the Scorpio edition of the Zodiac Series from Entangled Publishing. It was my first ever bodyguard story and although that book kicked my butt in so many ways as I was writing it, I was so pleased to have the opportunity to finally write a trope I've always wanted to tackle. I love me a good bodyguard story!

I also won the Romantic Book of the Year Award at the Australian RWA in Melbourne with my digital title Risky Business published by Escape (digital arm of Harlequin here in Australia). This book was the first single title I ever wrote and was one of those that almost made it so many times. I scored my first agent off it, it was taken to acquistions here in Oz by a major print publisher etc etc but it just never seemed to get across the line. It was thrilling and rather vindicating several years and many we-love-it-but rejections later to know readers loved it so much to present it with this much coveted award.

Release of the first in my Outback Heat series - Some Girls Do - through Tule Publishing. This was a series I'd been kicking around for a while and had decided to self publish until I ran the idea past Tule. It was blessed with great titles and great covers and I'm so proud of this series!

Release of #2 in Outback Heat - Some Girls Don't. Poor Selena got a bit of a bollocking from reviewers because she chose her career over her man - twice! I won't apologise for her - I love her single-mindedness which if it had been in the hero would have been seen as strong and macho. That's just the way she came to me and I had to be true to her. C'est la vie.

Release of #4 and final book in the Outback Heat series - Some Girls Lie.

My daughter finished grade 12. Anyone who's ever had their last child finish high school will know the amazing sense of relief it brings. She was also awarded the VET (Vocational Educational training) student of the year for doing two TAFE courses as well as her year 11 and 12 workload. Both of my kids are onto the next phase of their lives now and I'm immensely proud of how they've turned out. Just wish my Mum was here to see them!

My husband turned 50, I turned 46 and my daughter will turn 18 on New Years Eve!

So, there you go. Crazy-ass or what? Totally raving bonkers mad. I surpassed 50 published books and felt like writing and social media ruled my life! Next time I say I'm going to say yes to anything that comes along, someone please slap me! I've been taking it easy these last few weeks though and catching up on reading which has been bliss and I'm planning on having a much more sedate year in 2016.

What about you guys. Ever had one of those non-stop weeks/month/years? Whats your top tip for saying no, something you can see I'm very bad at....

PS - My new-to-me author find for the year was Madeline Ash - y'all should go out and read her stuff. It's brilliant!

PPS - if you want to stay abreast of my (much less crazy) release schedule in 2016 you can join my mailing list here.

Email ThisBlogThis!Share to TwitterShare to FacebookShare to Pinterest
Labels: 2015, 2016, Amy Andrews, HOLT, Ruby, the year that was, year in review