The Dog behind the Dawg

I've had a heap of reader feedback about Deputy Dawg, the beautiful but damaged canine companion in Slow Dance with the Sheriff. Seems like he's really resonated with people. So I'm hoping readers will enjoy the FREE epilogue to that story which is entirely in Deputy's point-of-view. You can read it on my website now.

But I wanted to share with you the dog-behind-the-Dawg. I modelled poor, damaged Deputy on my own big fella (pictured below), Mr Snufalupagus.  His appearance, his habits, his Bernese Mountain Dog traits.

For no particular reason we picked ourselves a really sensitive pup six years ago at the breeders. He was immediately the one we both were drawn to and he was so snuggly and connected when he looked up at us. There really was no question. And at the time we were surprised that the breeder was letting him go because he had A-1 markings and (as it turned out later) perfect elbow scores (elbow scores are important in big dog breeds because they're a solid marker to whether a dog is going to have problems with weight-bearing and arthritis later in life).  The lower the score, the more desirable from a breeding point of view. Our boy's score was a perfect zero.

﻿
So we couldn't believe our luck that they were willing to let this beautifully marked, skeletally perfect little man go to a pet home.

But as he grew up into the gorgeous, obliging boy that he is it was obvious that the breeders knew what they were doing. He has the most amazing, relaxed and gentle nature--he'd be the perfect dog to have around kids, if we had them--but with that comes some traits I've never seen in a dog I've owned (and I've had dogs all my life). 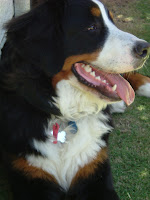 Essentially, he cannot handle being 'in charge'.  Lovecats readers might remember last year when we lost our little fella, Larry, to congestive heart failure. Well Larry's departure threw our poor big fella into paroxysms of anxiety, as if he thought the whole family was going to turn our attention on him and ask him to protect the pack and make decisions and generally be in charge. Despite everything we did to help him transition through the loss of Larry, he began to demonstrate major signs of stress (which I basically took verbatim and put them into Slow Dance with the Sheriff when Deputy has his big meltdown). It was very sad and he was terribly unhappy.

Yet he was still having the same love-filled, safe and comfortable life as before. He just really, really, really couldn't deal with the responsibility of being alpha.

So when our newest little girl came trotting along (literally--she was found trotting down the emergency lane of a six lane freeway out in the middle of nowhere) she took charge (cos she's pushy like that) and Mr Snufalupagus just about wept with relief. The two of them are BFFs now and she pushes him around and he ADORES her. 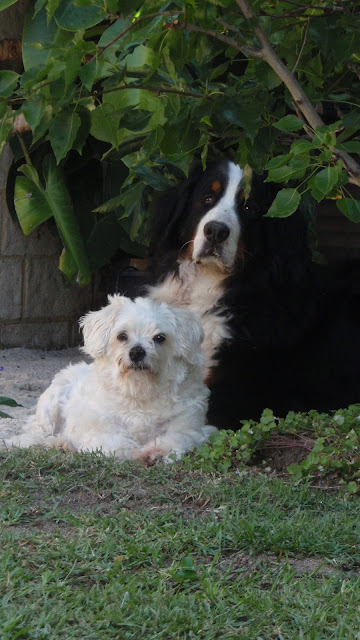 Not every dog I've owned in the past displayed the obvious alpha qualities, but even those that didn't were still socially confident, capable dogs. They were reasonably resigned to not being number one in the pack and the system worked well.  So this is the first time I've ever met a dog who would so willingly go to the back of the line even if no-one else was in it.

But that just makes him all the more special and precious to us, and whatever it was that the breeders saw in his temprement that made him go on the 'pet' list also makes him the biggest, snugliest, and most lovingly devoted dog you could ever hope to meet. Just so long as you aren't in some kind of crisis situation. Pretty sure he wouldn't cope in a crisis. But his good nature makes him emminently trainable, and he has a singular focus and astonishing nose that would make him great for something like tracking.

So those are the qualities I poured into Deputy Dawg on the page. The skills, the love, the loyalty, the deep-down damage, and I loved the way his doggie issues ended up reflecting the issues of his 'people'. And that, together, they all healed each other.

Have you ever had someone in your fur-family that was extra 'special' for one reason or another? Was it a mystery or do you know why they were the way they were? I'd love to 'meet' them here.
Posted by Nikki Logan